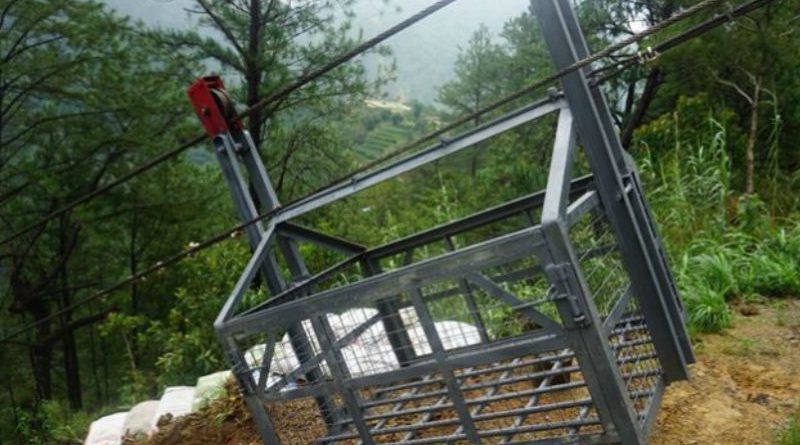 BOKOD, Benguet – Manual hauling of crops is the usual routine of farm families in Nawal, Bokod, Benguet every harvest season, but with the new agricultural tramline set up under the Department of Agriculture’s Philippine Rural Development Project (DA PRDP), local farmers will now be able to transport their harvests hassle-free.

Farmers in the area say that carrying heavy loads affect their health, especially the elders who still continue to make a living through farming. They would usually walk through the rough steep trail before they could reach the access road in their barangay.

Pistola’s house is near the second tower of the tramline, about 1.2 kilometers away from the access road where the first tower is situated. In his old age, he said that it would take him an hour to carry his harvest going up the access road, especially during rainy season.

“Karkaro nu agtudo ket sumang-at ti danum idjay karayan let delikado jay rangtay (during rainy season, the water in the river would rise and it could be really dangerous),” he added.

The Wakal tramline is already 100% complete as of August 14, 2019. It was initiated by the Municipal LGU of Bokod to provide a safe and fast transport system for agricultural produce and inputs from the sitios of barangay Nawal to the nearest access road. The tramline has a length of 450 meters with a horizontal distance of 315 meters. Funded by the World Bank (80%), the national government through the DA (10%), and the Bokod municipal government (10%), the construction of the Wakal tramline has a project cost of P4.65 million.

Rice, potato, coffee, fruits and other highland vegetables are produced by farmers in the nearby sitios benefited by the tramline. This includes eight more sitios that are within the influence area of the sub-project benefiting around a total of 112 individuals.

Marcelina Catao, 63, a resident of sitio Wakal, grows vegetables in a lot located near the second tower. She prefers to carry her harvests from the production area to her house so that she will not have to pay for laborers, locally called “kumboy” to carry her load.

With this intervention, residents perceive that the average travel time of hauling will decrease by 30-40 minutes.

The Wakal tramline is the first agricultural tramline system implemented under the PRDP in the Cordillera. Also proposed by the Bokod municipal government is another tramline that will soon be constructed in barangay Ekip worth over four million (P4.3 million).

Engr. Franklin Padon of Bokod municipal government said that the tramlines will be turned over to farmer associations near the area. Carriage fee will be collected from the farmers/residents for the fuel and maintenance of the tramlines.

This post has already been read 1482 times!Local legislators are pushing for the suspension of the implementation of Section 4