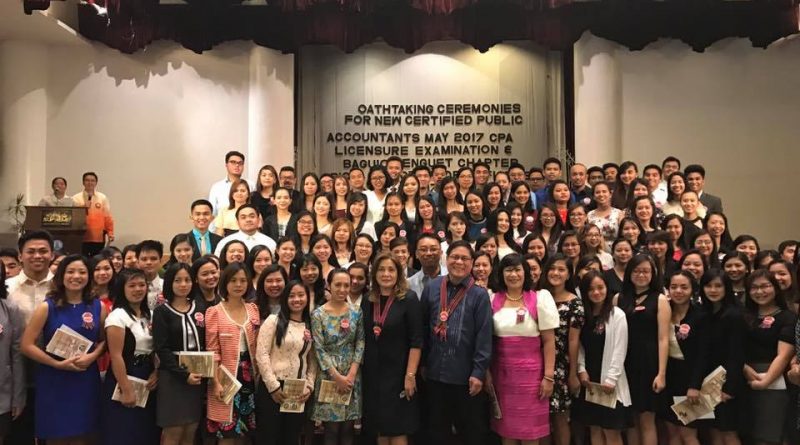 Baguio City – The Professional Regulation Commission (PRC), Baguio Regional Office and the Board of Accountancy (BOA) partnered with the Philippine Institute of Certified Public Accountants (PICPA), Baguio-Benguet Chapter to administer its third consecutive the oathtaking of newly registered CPAs and the induction of the officers of the local PICPA last July 1, 2017 at Hotel Supreme, here.

Arlyn S. Villanueva, a member of the Board of Accountancy, swore in the more than 120 passers of the latest CPA licensure examinations, led by May 2017 fifth placer Kevin C. Bango of Saint Louis University (SLU), as licensed accountants while Wayne B. Crispin, the Chief Regulation Division Officer of PRC, Baguio issued them their license cards.

See related story: Ifugao native is the May CPA Board 5th placer

This oathtaking edition is the most attend CPA oathtaking ceremony since it made its first reappearance in the City of Pines last July, 2016 having been gone for quite some time. The total attendees in each of the two previous ceremonies failed to reach the century mark.

This edition also had the widest geographical scope of the attendees as passers from different schools in Luzon attended the event.

Urdaneta City University in Pangasinan; Asia Carfeer College Foundation in Dagupan; Adventist University of the Philippines in Cavite; Saint Paul College-Bantay in Vigan, and the University of Pangasinan.

Among the schools in the Cordillera Administrative Region, SLU had the highest success rate in the latest examination, with 109 passers among 192 takers for a 56.77% passing rate. UC had 31 passers from 60 candidates for 51.67% passing rate while UB was at 50% with 6 passers among 12 takers.

Rebecca Occidental, from Rural Bank of Itogon representing the CPAs in commerce and industry, will head the 26 chapter directors and chair leaders this year, taking the cudgels from Rhad Vic Estoque, the outgoing president.

Constancia Molintas, the Government Association of Certified Public Accountants (GACPA) – CAR president, was also at hand to witness the event,