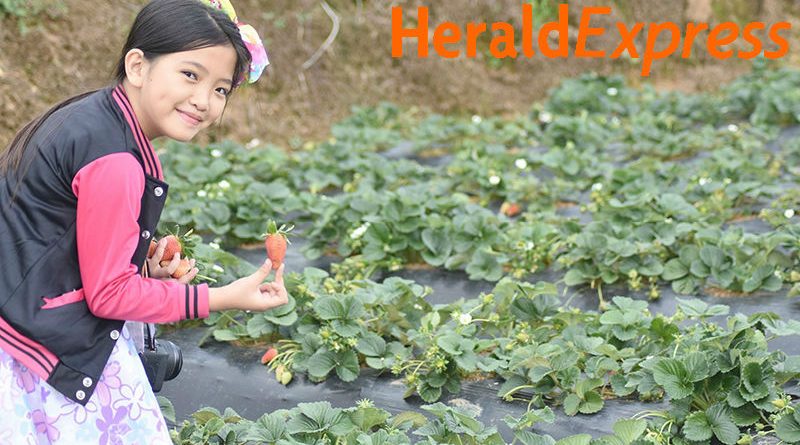 The farming technology practiced in these farms includes the use of green houses, drip irrigation system, and planting through hydroponics and ground soil.

The two farms in Guisguisa-an, Mount Data, Bauko are owned and operated separately by brothers Gabriel Calawa and Jonie Calawa, while Francis Ching manages the farm in Cada.

Gabriel Calawa, who owns the Green and Berries Farm, is from Pakpakitan, Kibungan, Benguet who married Andrea from Bulalakaw, Mankayan.

The Calawas had been planting highland vegetables and strawberries in an open field. However, Gabriel related that their plants were always affected during typhoons and strong rains hence, their income was just enough to start the succeeding cropping cycle and family’s subsistence.

Gabriel said that he was encouraged to undergo the modern agricultural technology when a certain Freddie Langpaoen, from Benguet, brought him and his family to Tagaytay City, Batangas to observe the high-tech farming approach.

Before 2007, Calawa started to procure a sloping garden, which he now tills today. He made some leveling of the lot, fabricated GI posts and bought plastic sheets as roofing.

He commenced the new farming approach after he completed procurement of equipment and gadgets needed for the drip irrigation system sometime in 2007.

Every after harvest, he managed to expand their green houses and procured additional irrigation gadgets. He now owns 12 tunnels of green houses which occupy about 4,200 sq. meters and 4 deep wells that supply the irrigation requirement of his farm. Additionally, he also uses mini-hand tractors to till the garden lots and mini-loader to level sloping areas.

Calawa showed how the drip irrigation system is operated. It is propelled by electricity with centralized valves, pipes connected to smaller tubing and emitters.

According to him, his family plants in a staggered basis so that the vegetable and fruit supplies of his market outlets in Baguio City and La Trinidad are sustained.   He currently plants strawberries and romaine lettuce. Romaine is popularly used as salad and garnish for burgers.

During the initial stages of his project, a certain company based in Manila contracted Gabriel as the buyer. Calawa then withdrew his deal because the payments made by the company became irregular.

A few meters away from Gabriel’s farm is the Green Salad Farm owned by Gabriel’s brother Jonie. The several greenhouses are presently planted with romaine and green ice lettuce, kale (leaf cabbage), spinach, and celery. Jonie is employing the same agricultural technology as his brother Gabriel.

Another farm we visited was the John Josh Strawberry Farm, owned and operated by Francis Ching, located at Cada, above barangay Sinto, Bauko.

Ching has now a total land area of three hectares all covered with green houses planted to romaine and iceberg lettuce, cabbage and strawberries using hydroponics and ground soil methods of production.

The three farms visited employ workers mostly from the lowlands.

Drip irrigation technique was originated in Israel way back in 1965. Hydroponics, on the other hand, is a method of growing plants by using mineral nutrient solution in a water solvent instead of soil. This is one of the oldest agricultural technology that dates back when hanging gardens of Babylon and floating gardens of China started.