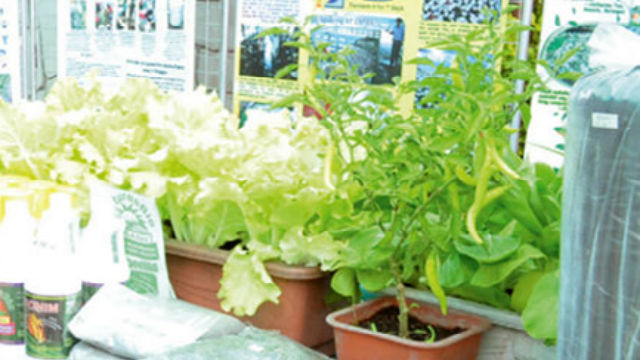 BAGUIO CITY  – The various stations of the Baguio City Police Office (BCPO) including its central headquarters at the heart of the city, started to bloom with the establishment of their own urban gardens planted to assorted vegetables pursuant to the Gulayan sa Kapulisan program of the local police force in cooperation with the city.

The put up of urban gardens by the different police stations is BCPO’s way of participating in the aggressive promotion of urban gardening in the city being espoused by the agriculture department and the local government led by Mayor Mauricio G. Domogan and Councilor Leandro B. Yangot, Jr., Chairman of the City Council Committee on Market, Trade and Commerce and Agriculture.

Senior Superintendent Ramil L. Saculles, BCPO City Director, said police personnel from the different police stations used recyclable materials like crates among others to propagate crops that provide added attractions inside and outside their offices.

The aggressive promotion and implementation of urban gardening among residents were part of the recommendations reached during the recently concluded Agriculture Summit in the city last May.

“The put up of urban gardens in our police stations is our own way of helping the government agencies and the city government convince residents to embrace urban gardens even in limited spaces within their homes to produce organically-grown vegetables for their own consumption,” Saculles stressed.

He commended the personnel of BCPO Station No. 2 for finding ways of putting up their own urban garden within their station amidst the very limited space in their area underneath the Magsaysay flyover, thus, residents must be resourceful also in using the limited areas within their homes to raise vegetables and other crops not only for their consumption but also for the market if warranted.

According to him, the urban gardens in the different police stations is part of the efforts of the BCPO to beautify the surroundings of the stations and help in environmental preservation and protection efforts as well as encouraging the public to raise their own food to achieve food self-sufficiency even for people living in urban areas like the city.

He added police personnel could either sell the vegetables that they produce or use it for their daily food requirements as part of the government’s effort to empower people to become self-sufficient in terms of food and basic needs so as not to heavily burden the environment for the provision of their food needs, among others.

Aside from BCPO Station No. 2, even the BCP|O headquarters along the main road of the city was able to put up its own urban gardens for the various offices housed in the main building showcasing the ability of the police personnel to be creative and innovative on the said matter in compliance with commendable agriculture and environmental programs of the concerned government agencies and the local government.