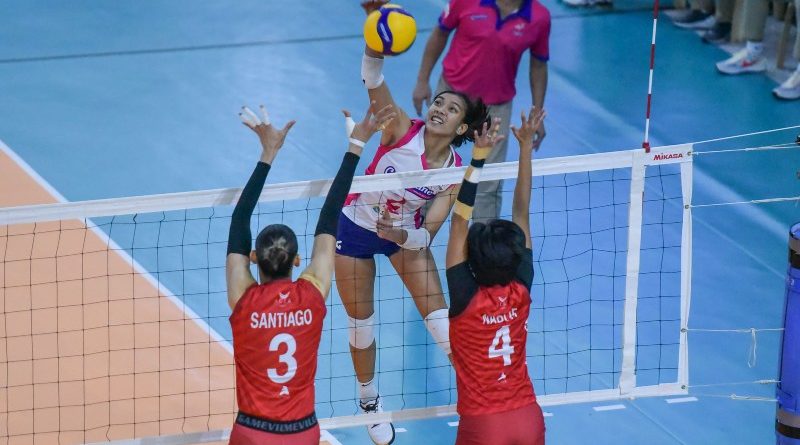 How would you react if the team organizers of Gilas Pilipinas publicly declare they don’t want or need Japeth Aguilar for a spot in the men’s national basketball line-up?

This is what it sounds like when Philippine Volleyball team head coach Odjie Mamon and Brazilian consultant Jorge Edson Souza de Brito announced they never considered star spiker Alyssa Valdez for the national women’s volleyball team and declared her permanently locked out for future tournaments.

No, I’m not qualified to decide who would fit best among our current women volleyball stars to form the best possible national team.

But not giving Valdez, Morado and Arado even an invite to tryout for a spot? Even as a bench player? Not open for them joining the team in future tournaments? These are outrageous!

Much more baffling are the reasons given why: they need fresh blood, younger, and taller players.

Are you kidding me!?!

Youth and physical attributes do not always lead to better winning odds so they better watch it.

Have these guys not heard of a 43-year old, athletically challenged Tom Brady, a quarterback who turned the Tampa Bay Buccaneers, then the worst team in American professional sports history record-wise, to a 2021 NFL Super Bowl champion or a 35-year old Lebron James, a forward who showed diminishing athletic abilities but still led the Los Angeles Lakers to a NBA championship in 2020?

Going by their criteria, their picks are full of outliers.

Outside hitter Jessica Margarett Galanza is younger than Valdez at 24 but shorter by two inches. Incidentally, Galanza is a teammate of Valdez at Creamline but is behind her in the depth chart of the Cool Smashers line-up during the Premier Volleyball League (PVL) Open Conference last month.

Libero Dawn Macandili is giving up  a whooping five inches to Arado and is older by two years. Libero Bernadette Pepito has very little big game experience under her belt at 18 and is shorter at 5’2”.

Considering the average height and age peak of Filipino volleyball players, are the locked out volleybelles not worth even a tryout just for a spot in the bench?

Geesh! If this was men’s basketball, critics and Gilas fans would have been up in arms as if a mortal sin is committed when the 34-year old, 6’10” Aguilar is denied an invite to tryout for a place in Gilas today.

For the record, Gilas head coach Tab Baldwin expressed his desire to have Aguilar in the Gilas line-up for future tournaments even though his young, tall and quick squad went two-for-two against the dreadful South Koreans in a recent FIBA tournament.

For all intents and purposes, what Valdez is for the women’s national volleyball team could be measured up to what Aguilar is for the men’s basketball team. It wouldn’t be outrageous if a June Mar Fajardo comparison is used instead.

Granted, Valdez, Morado and Arado may have been assessed as not the best players for their position or they may not have the right chemistry with the other members of the team or they are “old” and “short”.

Also, the facts that winning teams need to have role players and not be overloaded with superstar players who may duplicate some positions are not lost on me.

Still, history has proven they are one of the leaders of their respective teams and have the ability to put the team on their shoulders and carry them to playoff appearances and championships in tournaments.

They not only contribute court production but also provide intangible advantages, you know.

Like what Aguilar did for Ginebra and Gilas not too long ago.

Like what Brady did for the Buccaneers or James for the Lakers.

Are these not the kind of players a national team wants?

The team pickers need to examine themselves and reevaluate their position, at least the consideration of possibly getting the country’s best players for whatever role they can have in the national team.

De Souza claimed to have reviewed clips from the 2019 Southeast Asian Games and the 2021 PVL Open Conference.

To conclude that Valdez is not among Top 25 volleyball players in the country, exclude her from possibly joining the team in the future, and that she is not even worth a tryout based on what he saw is totally nonsense.

If he had conducted a simple research, he should have determined that all three locked out players were selected for the 2019 SEA Games Philippine team.

Further, he would have known that the 2021 PVL Open Conference is probably the most competitive volleyball tournament held so far in Philippine history and the Creamline Cool Smashers, which Valdez and Morado are leaders of, finished runner-up in a closely fought best-of-three finals series. Oh, by the way, they breezed through the eliminations and semifinals, losing just one of 12 games

In this tournament, Valdez is among the top ten performers from the playoff teams in five of seven stat categories, Morado is top five in two categories, while Arado topped two of them.

Valdez is definitely a transcendent player, one who can be the foundation of a team whom schemes are built around and cause the opposing team to make major in-game adjustments.

She is one of few talented athletes who comes only once in a generation.

If she, Morado, and Arado accept a bench role on the national team, what volleyball related reasons could the Philippine National Volleyball Federation (PNVF) have to outright reject the possibility of rostering them?

It’s really hard to disagree those who are calling for De Souza and the responsible PNVF officers who picked the team to have their eyes checked or their brains scanned.

On the other hand, the PNVF might be on to something we have not yet.

PNVF President Tats Suzara recently asked “whoever they may be” support for the national volleyball teams.

Well, that support is also a combination of being given and earned. Sure, Filipinos would still support their own but nobody wants to be associated with losers. So the teams they formed better not stink if their decisions are to entice the volleyball fandom’s support.

Personally, I am fond of fielding at least the best team on paper for the country in international competitions but do defer to their expertise and respect their decision in this one.

I eagerly wait to watch these teams perform in the Asian Women’s Club Volleyball Championship in Thailand this October, 2021 as a Filipino sports fan.

If they don’t show up and register wins here and there, we all know who had the nerve to exclude three of the best volleyball talents in their respective positions from the team.

It ain’t the players who are selected for sure!

This post has already been read 920 times!TABUK CITY, Kalinga – With the voter’s registration extended, the Commission on Elections