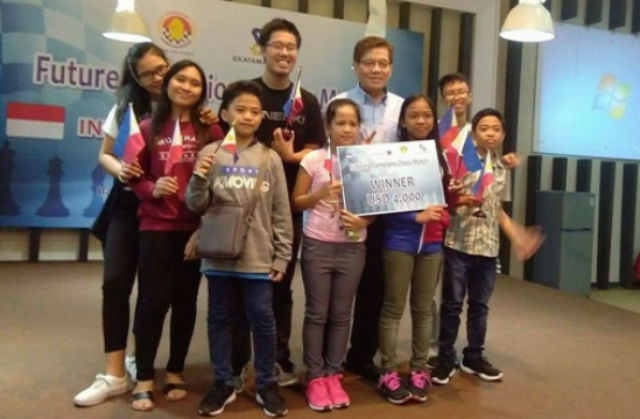 LUNA, Apayao – The 8-member Philippine chess team scored an overwhelming 6-2 count to outplay the age group chess champions of Indonesia in the final round and clinched the championship of the inaugural “Indonesia vs. Philippines Goodwill Chess Matches” on September 9-13 in Jakarta, Indonesia, securing a $4,000 prize.

Rising chess star Daniel Quizon of Dasmarinas, Cavite, playing in the 14 under category, led the Philippine team with a stunning 5.5 points, yielding only a draw in six rounds of duels.

The Philippine team had a good start as they dominated the first round, drew the second round and then outplayed again the Indonesian in the third round.

The Philippines entered the fourth with a chance to end the match without going to the fifth and sixth rounds. They were on the verge of attaining it by leading 4-3 with Pangilinan, who is playing the last match still to be concluded, needing only a draw. His opponent proved to be resilient got a full point allowing the Indonesian team survived with a draw, 4-all.

The Indonesians showed what they’ve got in the fifth round by stunning the Philippines with a devastating 5.5 to 2.5 score and live to fight for another day.

This set the stage for the sixth and final round, where the Philippine Team has to get at least a draw to pocket the top prize. Garcia, the most experienced player in the line-up, however, want the team to go all out and challenge his co-players to get the whole point. “Bawal ang matalo ah, at ibuhos na lahat ng energy ”, he said.

The Philippine Team indeed did not disappoint and got four wins and four draws without any loss for a total of six out possible eight points.

Asias’s first Grandmaster Eugene Torre, coach and delegation head painstakingly reviewed the games of the players after each round to correct any lapses in the positions and not to miss any good opportunities in their games. He was so happy that the team proved their mettle in this duel prompting the Indonesian organizers to arrange a rematch.

The Philippines as champions brought home a prize of 4,000 USD while the Indonesian team got 3,000 USD as runner up.

Torre, who have high hopes to these young guns of the Philippines, motivated them to improve further their skills to show the prowess of Filipinos in this mind game and to possibly win the rematch. He extended his appreciation to those who prayed and supported the team. He also thanked the parents who allowed their children compete in this prestigious tournament.

6     6SharesAmerican mixed martial artist Emilio “The Honey Badger” Urrutia is excited to make his way back to the ONE Circle,