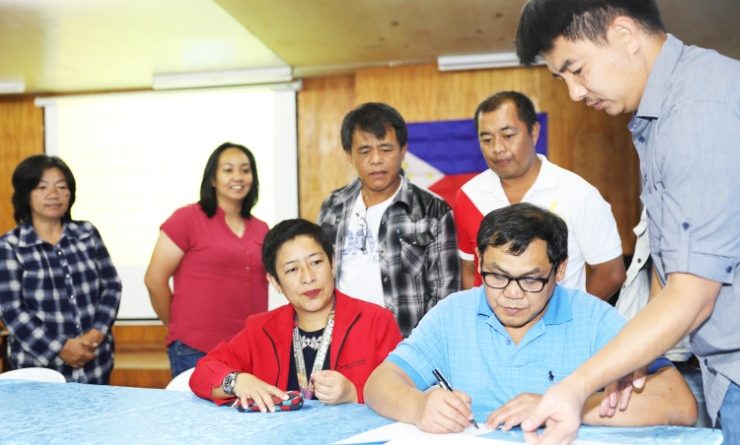 TUBA, Benguet  – Philex Mining Corp. has turned over about P56 million worth of infrastructure projects ranging from concrete road and retaining wall to school-ground shed and health-care facilities to irrigation system and potable water installation to the five outlying communities of its Padcal mine in this province.

Padcal mine’s Community Relations (ComRel) Dept., which had implemented the projects, said that P51,745,339.63 of the total P55,596,589.76 projects covered those that were carried out through its Social Development and Management Program (SDMP) while P3,851,250.13 involved projects under the CDP, or Community Development Program.

These projects form part of the 2017 SDMP budget as well as the unspent funds carried over from the previous three years, according to the company’s AVP and assistant resident manager of Padcal mine, Roy Mangali. “The company is steadfast in its commitment to improve not only the welfare of its employees, but also of its outlying communities,” he said.

The company held formal ceremonies on Wednesday, April 18, at Padcal mine’s Smith Hall, to mark the turn-over, along with the signing of an MOA, or memorandum of agreement, between Philex Mining and each of the five outlying communities on the infrastructure projects to be implemented this year.

The two-page MOA provides, among other things, “[t]hat both parties shall see to it that all PPAs [programs/projects/activities] provided in the approved 2018 ASDMP [Annual SDMP] of PHILEX shall be religiously implemented.”

Philex Mining and its host villages of Camp 3, in Tuba, and Ampucao, in Itogon; and its neighboring villages of Camp 1 and Ansagan (both in Tuba), and Dalupirip (Itogon) collectively called outlying communities also agreed that they jointly conduct regular monitoring of the implemented projects as well as compile the corresponding reports required by the Mines and Geosciences Bureau (MGB).

A government agency that regulates the mining industry and operates under the Department of Environment and Natural Resources (DENR), the MGB also approves and monitors the carrying out of SDMP, which is being implemented in areas where a miner operates has ongoing operations, as well as the CDP (covering areas undergoing exploration) projects.

In its report submitted to the MGB-Cordillera Administrative Region, in Baguio City, the ComRel said the SDMP projects turned over to barangay Camp 3 and barangay Ampucao amounted to P20.94 million and P22.77 million, respectively, while Brgy. Camp 1 got P2.78 million, barangay Ansagan had P2.45 million and, barangay Dalupirip, P2.8 million.

“Thank you, Philex Mining, for having supported our barangay through the implementation of various infrastructure projects,” Cipriano Balinag, chairman of barangay Camp 1, said in a speech during the turn-over ceremonies.

This was echoed by the chairman of Brgy. Ansagan, Leopoldo Palabay, who also thanked Philex Mining for the other assistance it has extended to the outlying communities, including free health-care services, scholarship grants, and livelihood projects.

Besides the SDMP, Philex Mining also carries out the Information, Education and Communications (IEC) campaign, where it engages the media on the benefits derived from the mining industry, and the Development of Mining Technology and Geosciences (DMTG), through which it funds training for and research and development as well as further studies being pursued by professionals to further improve the industry.

The MGB-DENR requires a miner to allot 1.5 percent of its operating costs incurred in the previous year for the current year’s SDMP, IEC, and DMTG projects. The total share is divided into 75 percent for SDMP, 15 percent (IEC), and 10 percent (DMTG).