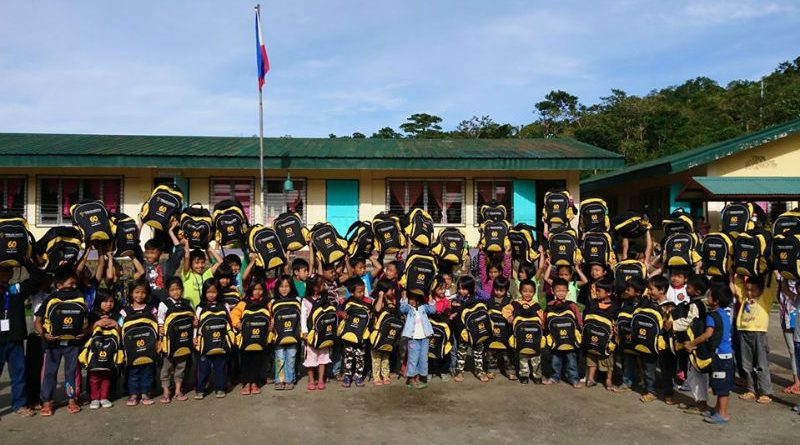 TUBA, Benguet – A beneficiary of Philex Mining Corp., it used to be an unknown primary school in a remote village amid a mountainous area. Under the supervision of a cluster principal, four teachers attend to more than 70 pupils from kindergarten to Grade VI in the school’s multigrade classrooms. Do not be deceived by its smallness, however, as the Ligay Elementary School (LES), in this town’s Sitio Ligay, Brgy. Camp 1, is the Department of Education’s 2017 awardee for the Best Multigrade School, in all of Benguet.

“Being in a remote area has made me more resolute in devising innovative ways and fresh instruction materials to teach the pupils critical thinking and how to be more creative,” says Remy Dum-ao, who looks after the LES on top of her duties as principal of the Tagadi Housing Elementary School, also in Tuba. “Having almost nothing of the resources enjoyed by more privileged schools has not deterred me from doing better.”

On Saturday, March 10, Dum-ao gave a Philex Mining media-affairs team a tour of the school, including an organic-vegetable garden and some areas in classrooms which she had converted into “corners of learning.” These “corners,” she says, are where “our pupils spend their leisure or free time to engage in educational games or play with one another using classroom materials which they themselves helped create under the supervision of their teachers.”

The day also marked the school’s annual cultural activity dubbed “Awarding and Festival of Talents,” where pupils engaged in a number of contests, such as singing, dancing, smartphone photography, poster-making, and modeling their own creation of avant-garde outfits fashioned from indigenous, recyclable, and biodegradable materials found around them. “There is nothing big about this, of course, save for the kids developing their creative skills and having the confidence to face the audience and talk before a bigger crowd,” stresses Dum-ao, who has since been invited to speak in many educational forums and workshops on how she has managed to keep LES in top form, in spite of being small and not having enough resources.

“I always tell the teachers and those who care to know that being small or having nothing should make one more creative, not desperate,” she says, beaming, and informing her visitors that LES bested all the other contenders from the province’s 13 other districts. “There’s always a way of doing things. Besides, we get some help as well for some infrastructure from our benefactor, Philex Mining.” (A district is composed of between 20 and more than 40 elementary schools, although not all of them are multigrade.)

The manager of Legal Div., Eduardo Aratas, at the company’s gold-and-copper operations in Padcal, Benguet, says in an interview in his office that Philex Mining is delighted that the LES has been doing fine, echoing Dum-ao’s principle by noting that “small” can, indeed, mean “big.” He adds, “This is great news not only for the LES and its teachers, but also for us, as the school is part of our outlying communities.”

He also expresses belief that educational assistance is one of the best gifts a company could give to its stakeholders. Philex Mining had for 2017 set aside P14.4 million for its scholarship grants to college, high-school, and elementary students, as well as for those in the technical/vocational (TechVoc) courses. In 2016, it allotted P11.8 million for its 114 full college and 24 TechVoc scholars; 374 students in elementary and high school who received educational subsidies; and 130 secondary students who were given education assistance (monthly monetary allowance).

Padcal mine’s Community Relations Dept., meanwhile, has implemented a number of infrastructure projects in Brgy. Camp 1, including the LES, which, together with Tuba’s Brgy. Ansagan and Itogon’s Brgy. Dalupirip, form part of the miner’s neighboring villages. The host villages are Brgy. Camp 3, in Tuba, and Brgy. Ampucao, in Itogon. “It is us who concreted the road leading to the school’s main entrance via our SDMP, or Social Development and Management Program,” says Mila Molintas, ComRel coordinator for Information, Education, and Communications (IEC) campaign and for Development of Mining Technology and Geosciences (DMTG).

Tuba and Itogon have become two of the four first-class municipalities in Benguet, owing to the “significant economic impact” of Padcal operations, the company has said in previous statements. The nine other towns in this province listed under third, fourth, and fifth economic classes are all into agriculture, while three of the four first-class municipalities are predominantly mining communities. The company paid for this year a total of almost P15 million in LBTs, or local business taxes, to the municipalities of Tuba and Itogon, which host Padcal mine.

Saying that an innovative and more effective learning is not just confined in the four corners of a classroom, Dum-ao is proud of the school’s organic-vegetable garden blooming with many kinds of lettuce and herbs, as well as fruits like cherry tomatoes. She reveals that pupils are sometimes sent by their teachers to this garden to do some reading or creative arts, such as painting, or answer the questions hung by the trees or the fence.

“It sounds fun, isn’t it?” she says, giggling. “This is some kind of a play-and-learn area for our pupils and also for us teachers. Studying, when it is done via innovative learning, isn’t boring; it’s fun.”