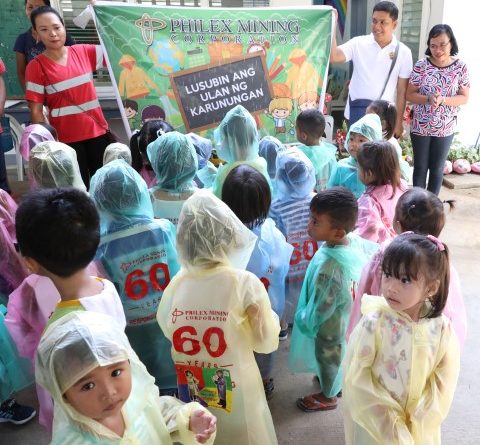 TUBA, Benguet – Philex Mining Corp. has distributed raincoats to 148 students at a public elementary school and a day-care center in San Fernando, La Union, as part of its fulfillment of a corporate social responsibility (CSR), bringing to over P600,000 the amount spent for a five-year social-projects program in the community where the company has its Poro Point Installation.

“We are here to give you a gift on your first day of classes for this schoolyear,” she said, her voice drowned by the cheers coming from the students of San Agustin who gathered at the school’s covered court. “And since it is the start of the rainy season, we are happy to distribute to you the raincoats that will protect you from the rain.”

In an interview, Pangan said Philex Mining has spent at least P603,000 or more than 47 percent of the P1.27-million funds allocated for Social Development and Management Program (SDMP), starting from 2013, aimed to help in the development of Brgy. Poro, which has a total households of 1,814.

The Poro Point Installation, situated on the coastal village of Poro, is where Philex Mining ships its gold-and-copper concentrates from to a refinery abroad for further processing.

Pangan said that under SDMP, Poro Point has spent since 2013 the following amounts for its various projects, benefitting its community and the city government of San Fernando: §  P211,652 for health services, such as medicines and medical missions; §  P30,642 for education, such as textbooks and school supplies; § P123,440 for livelihood projects, such as seminar-workshops on cosmetology for the housewives and out-of-school youth; §  P187,050 for public infrastructure like pathways construction and road repairs; and §  P50,224 for community assistance and socio-cultural support.

For its information campaign on the institutionalization of public awareness on the benefits of mining and geosciences, the Poro Point Installation has spent P209.669 or 82.4 percent of its total budget of P254,475 allotted for a five-year period ending in December.

It has also spent P48,372 or 28.5 percent of the P169,650 budget set aside for the DMTG, or Development of Mining Technology and Geosciences, for the training and retraining of industry professionals.

“We have religiously provided assistance to our host community here in San Fernando, as well as the city government, to the best of our ability and what is required of us by government,” Pangan said. “And we will not waiver in fulfilling our duties to the community, whose continuous support Philex Mining values so much.”

This post has already been read 1243 times!It’s a rare sight to see Team Lakay fighters seethe and seemingly lose