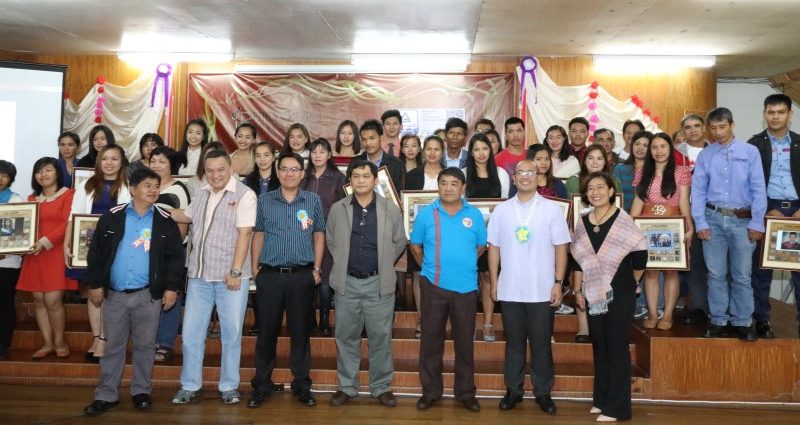 TUBA, Benguet – One youth talked about having self-discipline and the right attitude in school while another said about parents being his inspiration while studying, and another believing that you would reach your goal if you worked hard for it.

They were all recent graduates from college—beneficiaries of scholarship grants from Philex Mining Corp., which for this year has P14.4 million for deserving students—talking before the company’s current scholars. The latter were also regaled and inspired by the other speakers, notably the guest of honor, with their respective stories from their student days and on life lessons.

“Your goal will guide you,” Norman Alberto, a high-school teacher and a 2005 graduate of the Benguet State University (BSU), in the provincial capital of La Trinidad, said during formal ceremonies titled “Philex Salutes the Scholars: A Tribute Program for the Graduates.” “It will lead you to the right way, he added. “So you need to have a goal in your life.”

Held Thursday, July 27, at the Smith Hall of Philex Mining’s Padcal mine, in Tuba’s Sitio Padcal, Brgy. Camp 3, the event had for its main speaker Andrew Macalma, dean of Student Affairs Office, Saint Louis University, in Baguio City, who was all praises for the scholars, saying, “I hope that you will remain and continue to become better every day. He added, “You only have not given your parents hope, but also a promise that life would be better.”

He reminded them, however, to listen and treat everybody fairly, no matter their status in life. “It is when you have reached this kind of mindset that you become a gift to others and to society,” said Macalma, who enlivened about 30 scholars and their parents, as well as government officials and other guests with his critique of “outliers” and “vincular.”

In Malcolm Gladwell’s Outliers: The Story of Success, he said, where the author discusses what makes some people achieve high levels of success, it is repeatedly mentioned that the key to obtaining world-class expertise in any skill is practicing this the correct way for a total of around 10,000 hours, thus the “10,000-Hour Rule.” Macalma was quick to remind the scholars, however, about the need to connect (a vincular or link) with and a man for others, even if, as scholars, they are some sort of outliers or a cut above the rest.

“Be of help to others,” says Macalma, who gushes at the lush vegetation around a well-developed Padcal community, brought about by over six decades of responsible mining, and reveals that this is his third visit in the mine camp, the first of which was almost 30 years ago. “You must have a ‘conscious conscientiousness.’ ” He adds, “Even when you cook rice or egg, do it like a scholar.” And despite being scarred nowadays by a number of social factors like corruption and deceit, he told the scholars to be an inspiration to anyone, anywhere, and whenever—and make many others realize that, “Even with small people, big dreams are possible.”

Aurora Dolipas, manager of Community Relations (ComRel) Dept. at Padcal, said 24 college scholars graduated this year in various disciplines, and seven other scholars finished their technical-vocational (TechVoc) courses. She added that the screening for some of this year’s scholars is still ongoing.

These scholarship grants are being funded through Philex Mining’s Social Development and Management Program (SDMP) as well as its Development of Mining Technology and Geosciences (DMTG), which, together with the Information, Education and Communications (IEC) campaign, are funded 1.5 per cent of the company’s previous year’s total operating expenses.

Abraham Banos, a mechanical engineer from SLU (2016), said in his testimonial that he’d made his parents as his inspiration while he was studying, as “I’d always wanted to be an engineer.” As his face lit up with fond memories of his student days, he told the scholars: “If we have dreams, we must take action!” For her part, Florina Liwan, a mining engineer who also graduated from SLU last year, told the scholars to work hard and “be whatever you want to be.”

Addressing the event, Victorio Palangdan, mayor of Itogon, one of the two Benguet towns (the other being Tuba) hosting the Padcal operations, spoke of Philex Mining as a dutiful taxpayer, telling the scholars to be thankful to the company that has helped them pursue their studies. He said, “Philex Mining has also implemented a lot of social projects through its SDMP.”