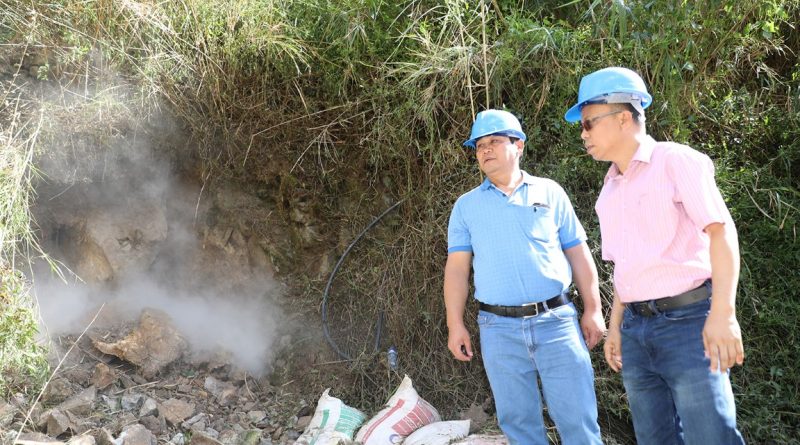 TUBA, Benguet – Staying true to its role as a government partner in the “right-and-principled” way of mining, Philex Mining Corp. has expressed and shown support for a nationwide crackdown against illegal mining launched recently in this province by a task force, which could become a formal and permanent unit, under the Department of Environment and Natural Resources (DENR).

“Since Philex is a responsible and conscientious mining company that has lived up to its vision-mission of discovering and processing minerals for the use of society, as well as delivering excellent value to its stakeholders, it is just fitting that we support any government efforts against illegal mining,” the company’s president and CEO, Eulalio Austin, Jr., said. “It’s all part of the way we do mining that is, right and principled.”

On Wednesday, Feb. 14, Environment Secretary Roy Cimatu led the blasting of entrance holes leading to the underground tunnels of illegal small-scale mining operations which the newly formed NTF-MC, or National Task Force – Mining Challenge, raided earlier within the reservation of the Philippine Military Academy (PMA), in Brgy. Kias, Baguio City, and in Tuba’s Sitio Basa, Brgy. Camp 4. This was preceded by the task force’s formal launch at the Training Center of the DENR-Cordillera Administrative Region (CAR), also in Baguio City.

“We’re here to show our support for this very laudable effort by the DENR to get rid of illegal mining not only in the province of Benguet, but also nationwide,” Roy Mangali, assistant vice-president at Philex Mining and assistant resident manager of Padcal mine, the company’s gold-and-copper operations in Benguet, said in an interview. He attended the event together with the manager of Padcal’s Legal Division, Eduardo Aratas.

In his Feb. 12 letter to Mangali, DENR-CAR Regional Director Ralph Pablo said, “This nationwide crackdown on illegal mining operations seeks to put an end to the illegal and irresponsible practices in the country and pave the way for genuine reforms in the mining sector. We hope to be with you during this special occasion and stand with us for responsible and sustainable mining in the Philippines.”

Created through a special order on Jan. 26, the NTF-MC is Cimatu’s first major project against illegal miners, the idea of which he hatched last November while he was at the PMA grandstand watching a performance of the cadets when he saw an area of the ground collapse, caving in. He came to know the presence of illegal miners just at the back of the PMA premises, and that they were operating underneath.

“So I created a task force to regulate these small-scale miners,” Cimatu said in a speech at the NTF-MC launch. “And I am contemplating to make this not just a task force but a full-time bureau or a formal unit of government, as one of the weakest branch or group of the DENR is enforcement. We have the laws, we are mandated to comply with the law and implement the laws.”

In an AVP shown during the launch, the DENR said the NTF-MC, whose 50 of its 101 members attended Wednesday’s event, had worked undercover to track down illegal mining activities in Baguio City and Benguet.

On Feb. 10, the task force announced its operation dubbed “Golden Sunrise,” which was composed of five groups that confiscated the pieces of equipment used by illegal miners as well as the voluminous mineral products dug out from the tunnels they had created. Composed of personnel from the DENR, Philippine Army, and the Criminal Investigation and Detection Group, the task force blasted 18 adits a horizontal or nearly horizontal entrance to an underground mine made by five illegal small-scale mining operations within the PMA boundary, which is a timberland site.

Meanwhile, Lomino Kaniteng, president of the Benguet Federation of Small-Scale Mining, was quoted in Baguio City’s newspapers as saying that his group has been gearing up for a further crackdown against illegal mining. He said small-scale miners are willing to get permits from the government in order to legalize their operations, as he pushed to fast track the creation of a “Minahang Bayan” (National Mine), where small-scale mining operations must be done only within the declared areas.

News reports also said the small-scale mining industry in Benguet has 23,000 miners in 70 associations and cooperatives, only 10 groups of which got permits to operate in Tuba and Itogon.