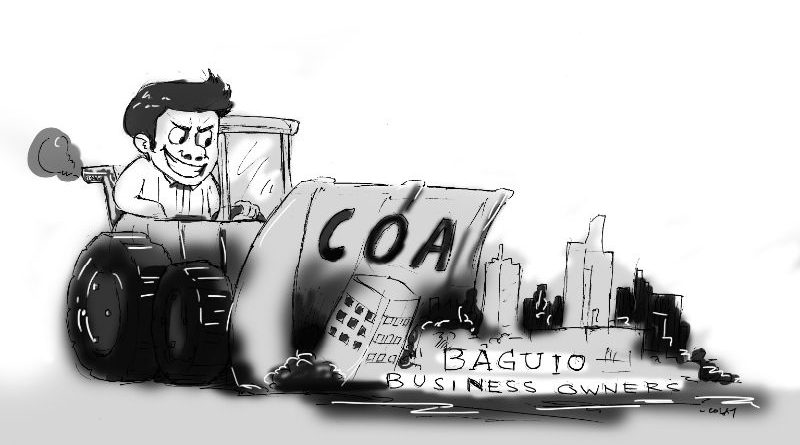 In the early 1970s, the local government of Baguio invited interested partners who can develop portions of the city-owned properties in the central business district in exchange for their occupancy of the areas they developed for a maximum period of 15 years after which the developments they introduced will automatically accrue to the city government. Some Baguio residents responded to the call of the city government and started developing their chosen plots that helped spur the city’s economic growth. Admittedly, the city government had insufficient funds at that time to build the needed structures that could be rented out to interested businesses to help in increasing the economic activities during the days when the city was still a quiet rural city.

The building owners started renting out the built up areas at P0.25 per square meter per day in recognition of the significant investments they infused in the development of the central business distruct. Various buildings were erected around the central business district area, albeit with no thematic design. When the first lease contracts of the building owners expired, it was renewed with the 15-year expiration period deleted that allowed the lease contract to be renewed for another unspecified period with the rental pegged at P0.75 per square meter per day.

However, the Commission on Audit (COA) came out with an Audit Observation Memorandum (AOM) regarding the failure of the city government to maximize the use of its properties for the generation of resources that could have been used for the implementation of development projects and enhance the delivery of basic services to the people of the city. The COA recommended the conduct of public bidding for the leased out properties to allow the city to benefit optimally from its available properties to generate resources for the government.

The building owners were alarmed over the COA findings and decided to talk things over with city officials and after a series of negotiations, the city and the building owners decided to increase the payment of the occupied areas to P6 per square meter per day in the first five years plus an increase of P1 per square meter per day every after five years and that the lease period shall only be 15 years after which the improvements will automatically accrue to the local government.

When it was time for the building owners to sign a new lease contract with the city, some building owners suddenly changed their mind and started raising questions over the inclusion of the 15-year period of the contract because it was not part of the last two contracts that they executed despite having agreed to the new terms of the contract. The building owners are now trying a last ditch effort to force the local government to remove the 15-year provision because they claim they already agree to the increased rentals which could already be beneficial to the city. Because of the need to protect their political careers, some city officials seem to be again riding on the issue and urging the building owners to seek the appropriate remedies to allow them to extend their stay in their leased areas that could reach up to 65 years.

We commend most of the building owners for recognizing the fact that they do not actually perpetually own the land where their buildings are erected. It was a product of an invitation for them to help the city develop the said properties and for over four decades now, they could have already quadrupled their income from the lease rentals they had been collecting from their lessees.

The building owners should remember that it was the COA that discovered the defective lease contract that is why it recommended for the conduct of public bidding for the local government to get the best deal out of its leased properties. City officials simply went out of their way to give preference to the existing owners as the lessees for the properties that they have built but it would only be for the last 15 years. Ironically, the building owners still insist on their contention as if they have the perpetual rights over the land that in the first place, the local government owns. The new terms of the contract seems to be a fair deal to concerned parties because if the building owners insist on what they want to have, it is best for the local government to already cancel the contracts of those who refuse to adhere to the new terms and bid out the properties to interested developers. An original Baguio residence will not suffice as a justification for their continued occupation of the city properties. Almost sixty years of occupation is more than enough to recoup their investments with a big margin of profit.