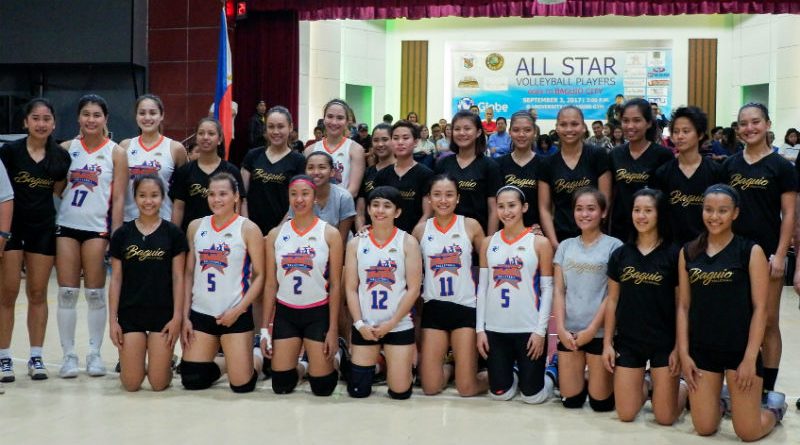 Baguio City – The Philippine All-star Women’s Volleyball (PAWV) players trooped  to the City last Sunday, September 3, 2017, for a chance to meet their fans as well as get to show their skills in against a Baguio All-Star squad.

Rachel Daquis, Rosemarie Vargas, Cha Cruz, Pau Soriano, Gyzelle Sy, Melissa Gohing, Myla Pablo, and Michele Gumabao graced a meet and greet event with their fans at the Porta Vaga Mall and displayed their volleyball savvy in the exhibition game against players from different universities in Baguio an exhibition game at the University of Baguio (UB) gymnasium.

Vargas also confirmed that she will use her final playing year for the Far Eastern University (FEU) in the UAAP Season 80.

The said event was endorsed by the city government and was included in the schedule of activities for the celebration of Baguio Day.

On the other hand, Mika Reyes, Aby Maraño, and Jovelyn Gonzaga were unable to join the event due to their schedules. However, the organizers said that the event will have a second part in the latter part of September.

Pablo also said that players from Baguio should also share their skills to help others. She added that [just because they are] All-star players, [they do not] experience the things other players are experiencing. [They also get to feel them].

The players had their dinner at the Crown Legacy Hotel after the exhibition game.

By: KHIM RUSSEL ABALOS. Mr. Abalos is a 3rd year BA Communication (Major in Journalism) student of the  University of the Philippines (UP) Baguio Campus.