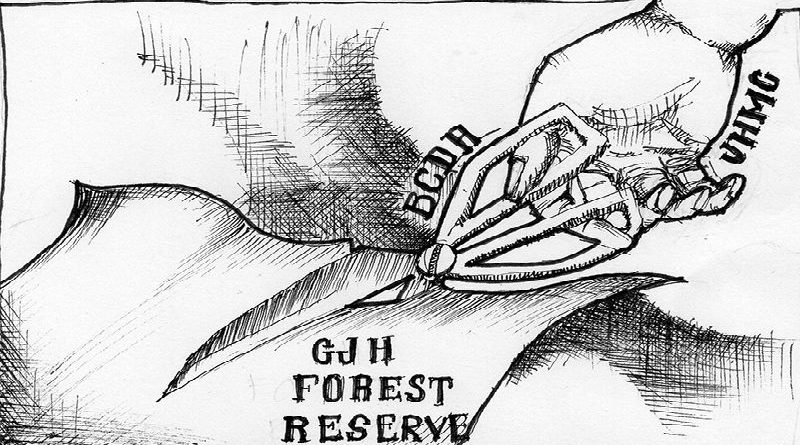 The State-owned Bases Conversion and Development Authority (BCDA) and its subsidiary, the John Hay Management Committee (JHMC), already applied for the issuance of special patent for the untitled properties of the State within portions of the 625-hectare Camp John Hay (CJH) forest reservation wherein 14 of the city’s 128 barangays are situated. Under exist5ing laws, rules and regulations, forest reservations are classified to be inalienable and indisposable lands considering it has been classified as a pure reservation.

With the enactment of Republic Act (RA) 8371, or the Indigenous Peoples Rights Act (IPRA), over two decades ago the government, through the National Commission on Indigenous Peoples (NCIP), had issued several certificates of ancestral land titles (CALTs) to certain duly-recognized ancestral land claimants over portions of the reservation and a certificate of ancestral domain title (CADT) to Happy Hallow, recognizing their having had occupied the areas since time immemorial and in recognition of the domain of the indigenous  peoples (IPs) over the said area through the past several decades.

However, the BCDA questioned the validity of the issued CALTs and CADT considering that the said titles were allegedly fraudulently issued by the concerned government agency. Some of the cases questioning their validity are pending before the local courts while the other cases are now awaiting resolution by the Supreme Court (SC). BCDA officials, recently appeared before the City Council to shed light on certain issues surrounding the long-overdue commitments of the State corporation to the local government pursuant to agreed terms and conditions in the past. They promised city officials that once the SC will decide upholding the legitimacy of the government issued CADT and CALTs, the company and its subsidiary will not further question the decision by not filing a motion for reconsideration to put things into their proper perspective.

What residents simply want from the BCDA and JHMC is for humane treatment by allowing them to repair their damaged houses and giving due course to the entry of construction materials in their areas for such improvements. On the other hand, BCDA officials claimed the stringent rules and regulations are simply to regulate the entry of construction materials in the different barangays to prevent residents from expanding their structures that tend to affect the areas their structures currently occupy. The BCDA was able to prove there were individuals who had not been honest, not only in the past but also during the recent months, in the declaration of the use of construction materials being hauled into the reservation. According to them, the implementation of stringent rules and regulations in the prohibition of the expansion of structures is to prevent the further multiplication of structures in the area while awaiting the segregation of the occupied areas to the qualified homelot, or actual occupants, pursuant to the provisions of Resolution NO. 362, series of 1994.

Some barangay officials, who are now vocal against the stringent rules and regulations, were found to have been tolerating the alleged illegal constructions in their areas of jurisdiction despite previous agreements for the status quo in improvements and construction activities to allow the segregation process to take its course for the BCDA to already award the titles to the actual occupants pursuant to recent surveys that were conducted for the said purpose.

We believe it is high time for concerned parties to get their acts together, sit down and discuss the problems and suggested solutions as well as how to go about to undertake the implementation of the outlined solutions to the pinpointed problems. Barangay officials should not be too hardheaded about the matter and insist on what they want because it is still a fact they are living within the property of the government.

We commend the commitment of BCDA and JHMC officials for their willingness to talk things over because they simply inherited the existing problems from their predecessors who made sugar-coated promises that ended up in the air and left the supposed beneficiaries in limbo. Everyone is entitled to his or her own opinion on the matter at hand but the bottom line is for everyone to be willing to take a step back and start the ball rolling for the realization of the long overdue segregation of the barangays.

Our city and barangay officials should not cry over spilled milk but instead they must be aggressive in pursuing a possible “win-win solution” to the questioned CALTs and CADT to allow the segregation process to work. It is clear that the purpose of the application for special patent is to establish BCDA’s clear ownership over untitled areas which will in turn be turned over to the concerned barangays once the segregation will be i