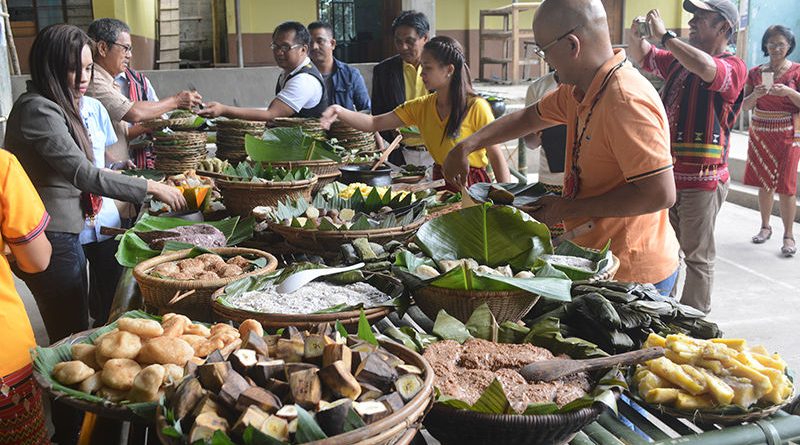 On Thursday, all 14 barangays of Pasil worked to put together a smorgasbord of home-grown cuisine and delicacies cooked with organically-produced ingredients.

“All the foods we have prepared are natural and organic. Farmers make their own fertilizers and pesticides using fermented vegetables,” said Tourism Officer-designate Milagros Batalao. “Our heirloom rice is even accredited as organic by the DA [Department of Agriculture],” she added.

With the annual celebration of the Slow Food Festival to attract tourists, Pasil aims to be known as an organic food destination. “We want Pasil to be a place to have your food prepared in the traditional way. We are just now realizing Pasil’s potential in tourism. We are pinning our hopes on it as a way of uplifting Pasil out of its fifth-class municipality,” she said.

Batalao said that the concept of Slow Food was introduced to Pasil by members of Slow Food International, an Italian organization founded in 1989 that aims “to prevent the disappearance of local food cultures and traditions, counteract the rise of fast life and combat people’s dwindling interest in the food they eat, where it comes from and how our food choices affect the world around us.”

“We decided to try it since we are actually already practicing Slow Food. It is only now that farmers became aware that their produce is considered Slow Food,” Batalao explained. “Organic farming is not a new concept in Pasil. We have always been growing our food using natural methods. It’s our way of life. This coincided with the direction of our mayor to develop farming tourism in Pasil,” Batalao said. She added that Pasil has an ordinance institutionalizing the practice of organic, traditional farming.

Slow Food International member Manny Onalan said that Kalinga is the ideal place to promote the advocacies of the organization since modern, market-driven farming practices have not been applied in the highlands. “Slow Food is all about good, clean, and fair food. We advocate for healthy, organic food grown using farming methods that are not only good for the consumer but are also harmless to the environment,” Onalan said. He said that unlike in the conventional business set-up, Slow Food aims to give farmers the bigger share of income with their produce.

His co-member Lam-en Gonnay said that their organization aims to enable people to be self-sufficient by growing their own food. “The food you buy from the store or from fast food restaurants, you don’t know where it came from, how it was produced. It already says in the label that it contains certain chemicals but we consume it anyway because it’s how we’ve always been. On the other hand, when you produce your own food, you can be sure that it’s healthy and you’re not dependent on producers to supply your food for you,” he said.

Onalan and Gonnay have been promoting Slow Food in Kalinga since 2012, conducting educational drives to spread awareness and teach local farmers to preserve and cultivate heirloom crops. “We ask them to bring varieties of crops and plants that they have inherited from their parents. We teach them to preserve and cultivate it.” Onalan said. “These are have not been chemically or genetically enhanced and growing them is literally a slow-going process but results in healthy and clean food that can be passed on through the generations.”

Acting Governor James Edduba who graced the event as a guest speaker expressed his support to the preservation of Kalinga’s heirloom crops and plants. “With the participation of the national government, we hope that these indigenous food, culture, and heritage will be given ample support so that its preservation will be handed down to the coming generations,” he said.