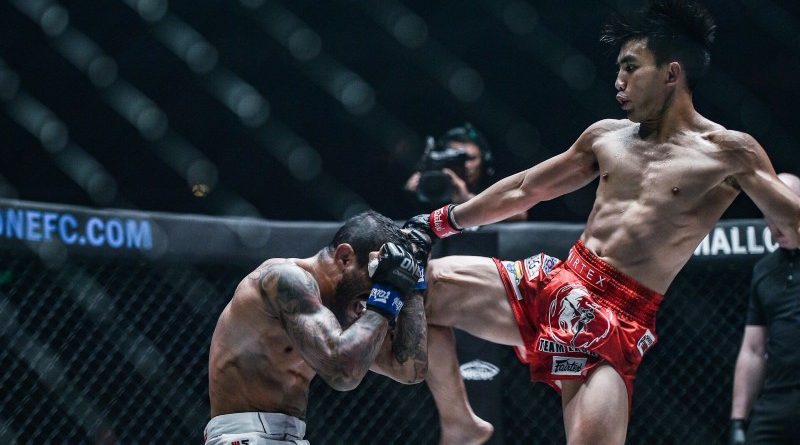 Joshua “The Passion” Pacio is currently the lone Filipino ONE Championship titleholder, having possession of the strawweight belt. In substance, he has been the division’s champion since September 22, 2018 when he wrested the title from Japan’s Yoshitaka Naito by unanimous decision.

So, is he giving up the reign by going up in weight?

It seems so, if Team lakay Head Coach Mark Sangiao is to be believed.

Sangiao made the teaser during a media session sometime last week.

“He’s [Pacio] telling me that that he’d like to defend his belt one more time, One last defense then he’ll go up a division.”, said Sangiao.

Say it isn’t so. At least not yet because there might be unfinished business to be taken cared off.

In the opinions of many MMA enthusiasts, there are at least two fights for Pacio that fans are probably very excited to see: bouts against Bokang Masunyane and Jarred Brooks.

True, Pacio’s reign is one of the best title runs in ONE championship and he is one of the few fighters in ONE that cleaned his division of its title contenders and challengers, except Lito Adiwang for obvious reasons, in recent years.

However, the arrival of Masunyane and Brooks has since changed the landscape of the division.

Both played out their ONE stints with explosive wins and proven to be legit contenders of the title.

Masunyane made his debut on December 2019 by defeating Ryuto Sawada by unanimous decision and followed this up a fabulous knockout of Rene Catalan, the third-ranked straweight then, on December 2020.

The twin victories convinced voters to ranked him the top contender to Pacio’s crown. Masunyane, though, has still to be seen in The Circle yet.

On the other hand, Brooks have been creating noise since he arrived. He, however, has all the right to do so based on how he has been performing.

The former UFC fighter made an explosive debut by submitting Adiwang, then fifth-ranked contender, by an arm-triangle choke on October 2021 and followed it up with a unanimous decision victory over Hiroba Minowa, ranked fourth, on January 2022.

These victories propelled “The Monkey God” to be ranked #2 contender by voters. He has been calling out the champion for a title match but ONE has yet to officially confirm any developments.

Pacio’s desire to move up in weight, however, makes lot of sense as a career-defining move.

Team Lakay’s young champion has take down every fighter who had once worn the ONE 125-pound diadem.

Alex Silva, Yosuke Saruta, Yoshitaka Naito, and Dejdamrong Sor Amnuaysirchoke all fell during the run of the 26-year-old Cordilleran phenom.

Pacio was only 20 when he first challenged the title holder on October, 2016 but failed to take the belt. Naito was too much an experienced champion that could not be dethroned by a raw, young fighter in his first title shot.

Destiny came calling two years later as Pacio finally wore the ONE Strawweight strap on his waist, capture the title in a rematch on September 2018.

A temporary blip in the radar occurred when he lost the belt to Saruta by split decision in his first defense on January 2019.

The judging of the fight, however, was too controversial that Chairman and CEO Chatri Sityodtong cannot believe what he saw and immediately ordered a rematch.

A short four months later, Pacio was a champion again.

Pacio has since defended his title three straight times, all against top challengers. He took out countryman Rene Catalan by an arm triangle choke on November 2019, survived Silva with a split-decision win on January 31, 202 and gave Team Lakay its first triology win with a dominating technical knockout victory over Saruta on September 2021.

If he indeed wants one more title defense before he crosses over to flyweight, who between Masunyane and Brooks  would he face?

It seems like an eliminator bout between the two top contenders should happen in short order to see who gets the spot.

27       27SharesThis post has already been read 1769 times!35 individuals wanted by the law were arrested in a week-long intensified manhunt