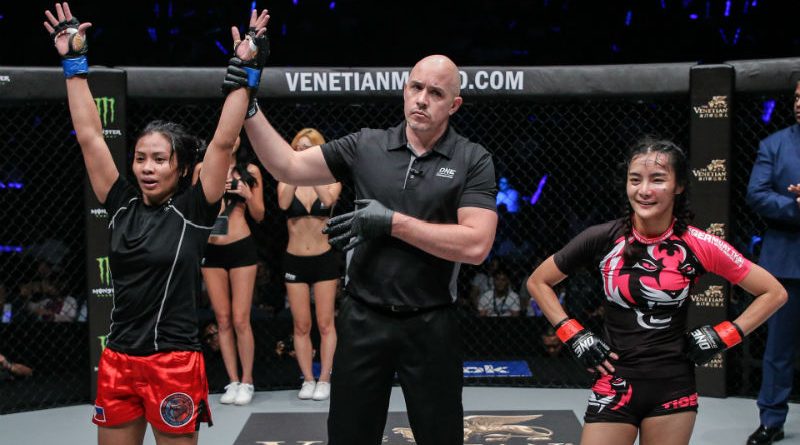 Joshua Pacio and Eric Kelly were both dispatched in abbreviated fashion by their respective opponents but Jomary Torres prevented a shootout for the Philippines in Macao as she delivered the first career loss of Rika Ishige with a submission, coming back from three take downs in the first round, during the ONE Championship’s Kings and Conquerors event last August 5, 2017.

“The Passion” suffered his second loss against nine wins when he tapped out due to a rear-naked choke against unbeaten Hayato Suzuki in the first round.

Suzuki impressed in his ONE debut, passed his first test against foreign opposition, and lived up to his billing as a well-rounded warrior

who has the ability to stop his foes with his heavy hands and technical grappling skills with his victory over Pacio.

Suzuki improved his already remarkable MMA record of 17-0-2, although this is his first fight against a foreigner outside of Japan.

On the other hand, Kelly faded after a strong start to yield to another heartbreaking loss with a third round TKO against Kotetsu Boku.

Kelly connected on a flurry of punches and kicks to floor Boku each time in the first and second but could not sustain the attack as he ran out of gas late in the second.

Boku capitalized and landed unanswered strikes forcing the referee to stop the fight 3:27 in the third.

Boku has looked outstanding since moving to the featherweight division, where he picked up his fifth win in six bouts, with his record now standing at 26-11-2. Kelly slides to 12-4 overall and is now on a three-loss skid.

The story of the night, however, belongs to the ONE cage debuting Torres who executed an excellent plan of attack and came back from three takes downs in the first round to catch a kick from Ishige, drop her with a right, and finished the bout with a rear naked choke in the second round.

The often smiling Thai-Japanese tried to take down Torres in the first round and succeeded thrice, only to receive counter blows from the Filipino while on the mat and see “The Zamboanginian Fighter” escape her ground assaults each time.

Torres got out of the first ground grip with a leg push. She reversed the second one, allowed the Ishige back on her feet to continue strike battles, and landed an overhand right that wipe all smiles off Ishige’s face. She again reversed the third, was rolled back under, then sneaked in a double leg kick to the gut right from the bottom that dropped Ishige on all fours, enabling her back to her feet.

At the onset of the second, Ishige attempted two kicks to the side but Torres caught the second with her left hand, locked it and started pounding with hard rights and kicks until Ishige dropped to the mat.

She then attacked both legs of the fallen Ishige with kicks. When Ishige managed to get back on her feet, Torres shifted her attack with kicks and well-timed rights.

An overhand right, the fifth punch connection since Ishige got back to her feet, then send “Tinydoll” back to the canvass 3:28 left in the second.

Torres then rained combinations to Ishige’s face forcing her to turn her back. That signaled the end as she converted the opportunity to a rear-naked choke that forced Ishige to tap.

11. Middleweight bout: Marcin Prachnio defeats Gilberto Galvao by Knockout at 1:23 minutes of round 1