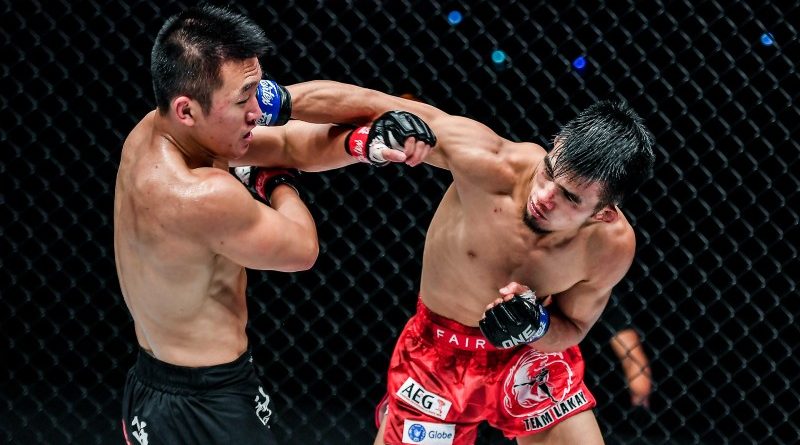 A relaxed Jeremy Pacatiw made a good first impression in his ONE Championship debut after scoring a unanimous decision over Chen Rui in ONE: Battleground held at the Singapore Indoor Stadium Friday night, July 30.

The Team Lakay new generation star he did not disappoint on his promise to showcase a new and improved version of the “Juggernaut” by  switching comfortably from powerful striking to impressive ground game.

The 25-year-old Igorot fighter came out smoking, nearly executing a rear-naked choke in the opening round before calmly shifting his attacks with leg kicks, combinations and takedown attempts.

Pacatiw, who just recently signed with ONE, showcased his versatility early on, pressuring Chen in the middle of the Circle and connected with some crisp right hands to set the tone.

When the opening presented itself, he slammed “The Ghost” to the mat with a a double-leg takedown.

On the ground, Pacatiw immediately took control and never relinquished it until Chen was able to get the action back on their feet.

He took Chen’s back and proceeded with ground and pound to the side of the head as he positioned himself for a rear-naked choke.

When the attempt wasn’t deep enough to complete the submission, Pacatiw changed strategies and focused mounting his rival but Chen managed to break away from the hold and resume action on their feet.

After some exchanges of hits, Pacatiw caught Chen with a flurry and hit another takedown and landed in the Chinese bantamweight’s guard. He then moved to half-guard and attempted an arm triangle but “The Ghost” swept him and took top position.

Both grappled for superiority on the ground with Pacatiw pushed kicking out before going for the leg. Chen countered by taking Pacatiw’s guard which, in turn, gave the opportunity for “The Juggernaut” to reach for the guillotine choke. The submission did not prosper as Chen was top of the Filipino as the bell sounded.

After a Pacatiw kick accidentally connected to the groin that resulted to an injury timeout. “The Ghost,” came out aggressively.

He, however, had to chase Pacatiw around the ring as “The Juggernaut” rode his bicycle and avoided the attacks with constant movement while attempting more takedowns.

Chen continued to press harder as the round nears its end but Pacatiw called on his “Manny Pacquiao” impression of head movement to continue frustrating his rival.

Chen managed to foil another takedown attempt and fired a a flurry of strikes that send Pacatiw to a corner just as time expired.

Those final moments were not enough for Chen, however, as Pacatiw’s solid work on the feet and his dominant positions on the ground in the first two rounds convinced the judges to award him the unanimous decision.

Pacatiw improved his fight record to 11-4 record while dropping Chen fell to a 10-2 slate.

Meanwhile, former three-time ONE Lightweight World Champion Eduard Folayang takes on Chinese mixed martial arts star Zhang Lipeng, who makes his ONE debut when ONE returns with ONE: BATTLEGROUND II, a tape-delayed event that airs on Friday, 13 August. In the main event.

This post has already been read 993 times!The city is not yet inclined to open inter-regional public transportation to avoid