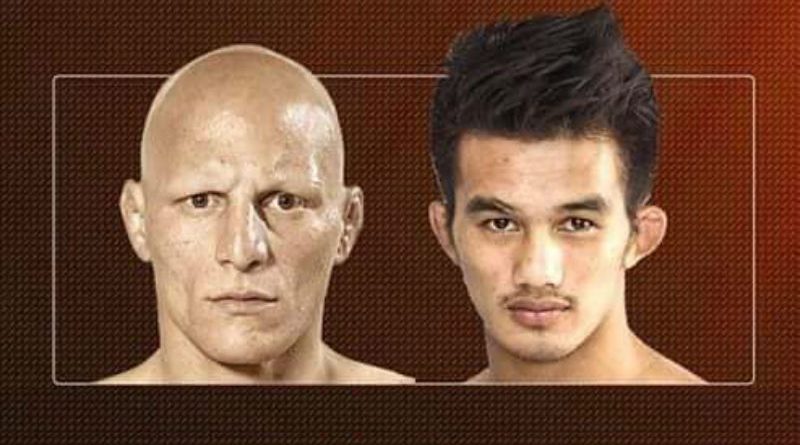 The three-bout winning streak of Team Lakay’s Jeremy “The Juggernaut” Pacatiw came to a halt when he lost a controversial decision against Ali Al Qaisi during Brave CF 29 held last November 15, 2019 at the Khalifa Sports City Arena in Isa Town, Bahrain.

Pacatiw dominated the strike department of this bantamweight clash but was on the other side of the stick in the wrestling department, lagging 0-4 in the takedown count. All three judges agreed in unison with the Jordanian winning the bout.

Pacatiw started the bout on fire, connecting a couple each of low, spinning and head kicks before being engaged in a clench. Al Qaisi secured his first takedown during the clench and gained side control.

Pacatiw then reverses positions and took side control, although Al Qaisi retained his headlock until both fighters struggled back to their feet.

Pacatiw connected two more low kicks while Al Qaisi nailed one head kick and a counter overhand right before the round ends.

Pacatiw again opened the second round with two leg kicks before both fighters exchanged punches.

At the 44 second mark, Pacatiw caught an Al Qaisi kick and connected a right counter. 14 seconds later, Al  Qaisi caught a Pacatiw kick and charged in for a takedown.

Both fighters exchanged blows while on the mat with Al Qaisi occupying the dominant position.

Pacatiw then forces the action back to their feet with 1:09 left in the round only to be taken back to the mat six seconds later by Al Qaisi via a leg trip.

Pacatiw again forces the action back to their feet with about a minute to go and immediately connects a low kick.

He connects another low kick three seconds later but Al Qaisi countered with a right straight.

The horn then sounded and the round ends inexplicably with 50 seconds remaining on the clock.

Al Qaisi became the aggressor as Round Three starts. Pacatiw counters with excellent lateral movement, although the backpedalling during the chase was clearly to avoid his opponent and not to initiate any kind of offense.

Pacatiw connected two more kicks, one each of the spinning and low variety, and an overhand-hook combination while was on the receiving end of an Al Qasi overhand left.

Al Qaisi charged in for his fourth takedown of the night and both fighters exchanged ferocious ground and pound blows until the round ends.

According to the Brave Combat Federation Wikipedia page, the federation scores their bouts following the Unified Rules of Mixed Martial Arts that were originally established by the New Jersey State Athletic Control Board and modified by the Nevada State Athletic Commission.

The unified rules states a ten-point must system is used. Three judges score each round with ten points to the winner and nine points or fewer to the other fighter. If the round is even, both fighters receive ten points.

Pacatiw clearly took the first round but the two takedowns by Al Qaisi in Round Two and the takedown to close Round Three could have been the deciding factors why the judges saw him winning the last two rounds for the win.

Team Lakay head coach Mark Sangiao expressed disappointment for the result. “I am speaking as a father for our dear athletes who are sacrificing so much and deserve clean game, for our future athletes that they may not experience the same, for future bouts that this will never happen again and for the love of fair game. This is not a rant nor a hatred, but a reality.”, he said in a Facebook post.

He also noticed the premature ending of Round Two and how it defused the momentum of Pacatiw’s attack given that both fighters now are on their feet and a Pacatiw strike fury to end the round should have handed him a winning score.

He, however, showed class despite the disappointment. “But Team Lakay and Jeremy Pacatiw is still grateful despite whole lot. Pure and straight sportsmanship, acceptance and respect is all we answer back. Fairness and clean game is all we ask.”, Sangiao ended his post.

Meanwhile, Edward “The Ferocious” Kelly suffered consecutive losses for the second time in his career after he was outpointed by China’s Tang Kai in the undercard of ONE: Age of Dragons last November 16 at the Cadillac Arena in Bejieng, China.

Kelly, a strike specialist who has six knockouts in 12 wins, got a favorable situation against Tang when the crowd favorite decided to stand and trade with him.

Kelly, however, could not get his strikes spew their sting while Tang leaned on takedowns early in the fight to take home a unanimous decision victory.

Kelly saw his record drop to 12-8 with the loss. He first suffered back-to-back losses when he was submitted Herbert Burns in December 2013 and was knocked out by EV Ting in October, 2014.