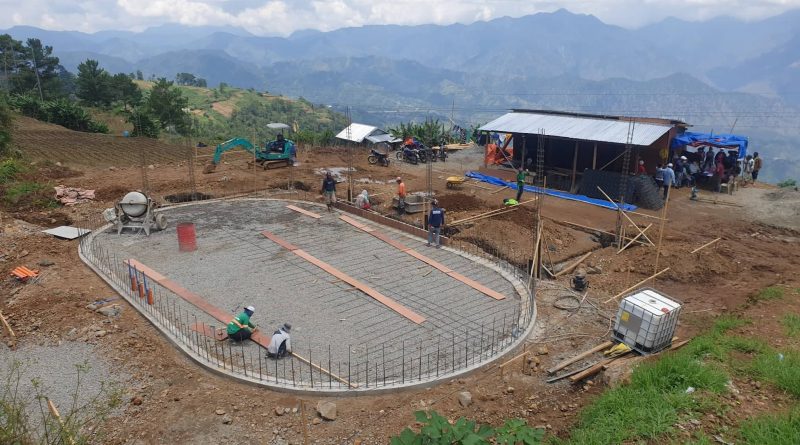 MANKAYAN, Benguet – The ongoing construction of the P20 million monolithic dome in barangay Balili will be completed in four to six months to improve the marketability of the agricultural produce of thousands of vegetable farmers in the vegetable-producing areas of the municipality.

Mayor Frenzel A. Ayong stated that the post-harvest facility will be equipped with a state-of-the-art cooling system to ensure the freshness of vegetables so that the farmers can still command a higher buying price for their produce to avoid heavy losses during the onslaught of calamities.

Aside from the cooling system, he added that there will also be a packing center to ensure that the agricultural crops will be appropriately packaged for the market.

The construction of the post-harvest facility started last month but the contractor will have to await the imported materials needed to complete the dome, while other works are being done to ensure the readiness of the same once the materials will arrive.

According to him, the municipal government will continue to work on additional slope protection works in the area to ensure the protection of the site where the dome and the building are constructed from any untoward incident that will compromise the safety of the facility.

Earlier, the agriculture department chose Mankayan as one of the sites where the post-harvest facility will be constructed to benefit the farmers in the barangay and its neighboring communities.

One of the members of the farmers association donated the 1,500-square meter site of the monolithic dome.

Mayor Ayong disclosed that the municipal government earlier earmarked some P800,000 as its counterpart for the ground levelling of the donated property.

The local chief executive admitted there are other needed works within the project site which are not included in the programmed works of the contractor that is why the local government will have to source out additional funding to ensure the readiness of the facility.

Barangay Balili is one of the largest vegetable-producing sites in northern Benguet as a huge portion of the area is situated within strategic areas of the Mount Data plateau where thousands of households derive their regular income from producing assorted highland vegetables.

Barangay Balili is the largest barangay among the 12 barangays of the mineral-rich town of Mankayan where six upland barangays are its food basket while the 6 lower barangays are mining communities hosting the operation of small-scale and large-scale mining activities.

By Hent
Photo by Joseph Awal