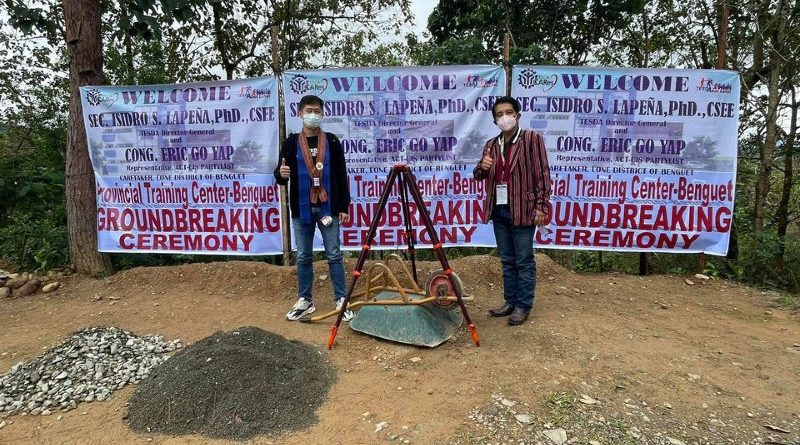 KAPANGAN, Benguet – A 3-storey structure worth P10 million will soon rise in the municipality to serve as the province’s training center of the Technical Education and Skills Development Austerity (TESDA) following the successful ground-breaking ceremony that was conducted  Lomon, Paykek for the said project.

Benguet Caretaker Congressman and Anti-Crime and Terrorism through Community Involvement and Support (ACT-CIS) Party-list Rep. Eric Yap, Gov. Melchor D. Diclas, Mayor Manny Fermin and TESDA regional and provincial officials led the simple ground-breaking ceremony that will signal the start of the construction of the TESDA training center which will serve as the avenue for the skills training activities of potential trainees wanting to acquire and improve their skills for gainful employment.

Yap, who chairs the powerful House Committee on Appropriations, closely worked with TESDA officials to source out the required funding for the realization of one of his aspirations for the province to have its own training center to empower the youth to acquire additional skills that they will be able to use to earn the needed income o help in improving the living condition of their families side from working extra hard to acquire formal education from the different higher education institutions in Baguio City and Benguet.

The TESDA training center will rise on a 300-square meter property of the municipality which was given by the municipal government to the agency through a 25-year deed of usufruct for the realization of the project because Benguet is the only province in the Cordillera that does not have the aforesaid training center.

Congressman Yap stated that the public works department will be the implementing agency for the put up of the TESDA provincial raining center which is expected to be completed in due time to serve its purpose in producing quality trainees that will be able to excel in their desired training courses for them to be able to have gainful jobs for them to be able to help their families hurdle the difficulties of life.

On the other hand, the lawmaker expressed his gratitude to TESDA officials led by Director General Isidro La Peña for allowing the implementation of the TESDA on Wheels program in the province where there will be a designated bus equipped with various equipment that will go around the 13 municipalities to provide the needed skills training for interested individuals.

According to him, the implementation of the TESDA on Wheels will pave the way for the youth to be able to acquire the needed skills on computer, electronics, construction among others even without going to Baguio City and La Trinidad and that they will also be able to be freed from the expenses that they will incur in improving their skills for their future productive activities as the facilities will be brought to their midst.

Congressman Yap also expressed his gratitude to the municipal government headed by Mayor Fermin for allowing a portion of its property to be used by TESDA to build the much needed training center to cater to the rapidly increasing training requirements of the youth wanting to further enhance their skills for them to be able to be productive residents of the province.

Last year, Congressman Yap filed a bill in the House of Representatives mandating TESDA to establish municipal training centers in the 13 municipalities of the province to bring closer to the people the services and available trainings for the people to be able to easily access the same without wasting their time, effort and resources travelling to the urban centers just to be able to avail of such services beneficial for the improvement of their skills and knowledge. By HENT