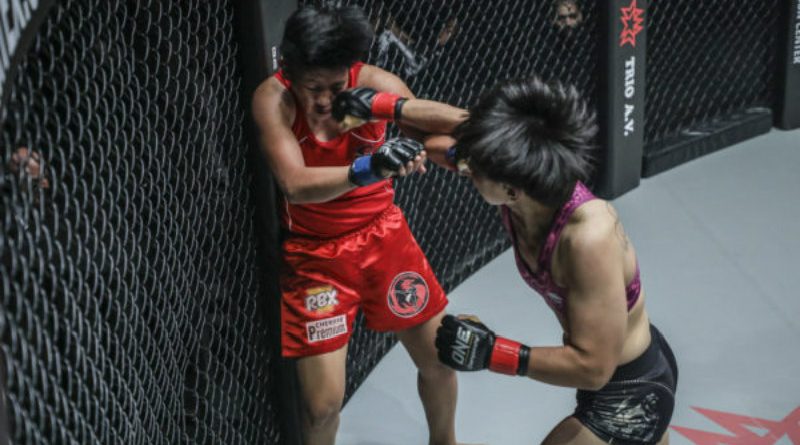 Team Lakay’s April Osenio, along with three other Filipinos, could not find their rhythm as they bombed out one by one during ONE: Warriors of the World held last December 9, 2017 at the Impact Arena in Bankok, Thailand.

Osenio had to be saved by the referee from further punishment when she was dropped to the canvass by a vicious right hand from “The Panda” Xiong Jing Nan at 3:44 mark of the first round during their bout.

Osenio had to trail early in this bout. A beautiful outside trip from Xiong put her to the ground, only to be followed by a guillotine choke attempt.

Osenio played good defense to slip free and stood back up.

It was not pretty, though, as Xiong pursued her with a barrage of strikes in a furious exchange of punches until the fateful right found its mark.

The loss drops Osenio’s MMA career record to 2-3, all coming inside a ONE cage. It was her second straight loss, following her gogoplata submission to Jenny Huang just more than a year ago.

Xiong improves her record to 10-1. This was her debut match inside a ONE cage.

Trinidad failed to duplicate Jomary Torres’ act as she succumbed to a rear-naked choke by Rika “Tinydoll” Ishige.

Trinidad engaged a newly improved Ishige, who added striking techniques to her already formidable grappling wizardry, to a stand-up exchange in the first round.

She was seemingly successful in doing the same in the second when Ishige managed to sneaked in a take down after ducking a punch that resulted to her receving of punches, chokes, and an armbar submission attempt.

Trinidad managed to escape but as they got back on their feet, a solid Ishige left hook set another round of grappling action where the Tinydoll executed the finishing choke.

Trinidad suffers the first defeat of her young MMA career, after winning her debut in Puerto Galera. This was her first bout in an MMA cage.

Ishige improves her record to 3-1, her only loss coming from Torres on a brilliant counter striking attack.

Yabo and Catalan were both knocked out in the first round by Thai opponents.

Yabo attempted to take the action to the ground but his highly touted opponent, “Deadly Star” Sagetdao Petpayathai, proved to be evasive, circling away from the fence of the cage.

With both men dropping their defenses to engage, Petpayathai took advantage of a clinch to connect well-placed knees, one of them landing squarely on Yabo’s liver causing him to crumble.

Petpayathai, who has won virtually every major title in Muay Thai, and was voted by the Thai media as as one of the greatest Muay Thai practitioners in history, improves his MMA record to 3-0, all in ONE cage.

The loss dropped Yabo’s record to 5-6. He suffered his fourth straight loss, the sixth of seven fight in a ONE cage.

Catalan planned to take his fight against 13-time Thai Wrestling Champion Kritsada “Dream Man” Kongsrichai to the canvass. He attempted it twice but ended up at the receiving end each time as the Thai reversed course and brought Catalan to the canvas in powerful fashion instead.

A Kongsrichai knee on Catalan’s belly transitioned into full mount and initiated a calculated ground and pound attack, and strategically connecting sharp elbows.Unable to handle the onslaught, Catalan tapped out, prompting the stoppage.

Kongsrichai moves his record to 6-3 and tied his fellow countryman Pongsiri Mitsatit’s record of most knockouts in ONE strawweight history.

Catalan’s record drops to an even 4-4, losing his third straight inside a ONE cage, though.