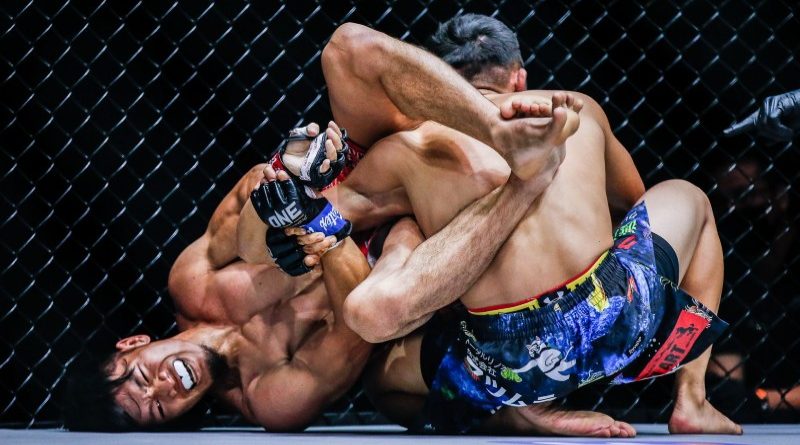 Not even his defeat to Jarred “The Monkey God” Brooks could wipe the smile off the face of Lito “Thunder Kid” Adiwang these holiday season.

You see, Adiwang has long dreamt of being a main event headliner in a big promotion. He just did that by being pitted against Brooks in the main event of ONE: NEXTGEN III, a pre-taped event  aired November 26, 2021 and held at the Singapore Indoor Stadium.

Well, a loss is still a loss but the way Adiwang performed showed he definitely has nothing to be ashamed of.

He showed he can stand toe-to-toe with Brooks but the latter’s experience, superb grappling, and his understanding on how to executed damaging ground and pound led him to end the fight with an arm triangle choke submission 3:07 left in the second round.

He showed he cannot be intimidated by his opponent who has all the right to trashtalk as his 16-2-1 record with appearances in some of the big leagues like Ultimate Fighting Championship and Bellator backs up his bragging.

This is why Adiwang can still hold his head high knowing he had travelled the hard road up until performing at the best that he can in his first ever main event billing. He simply lost to the better fighter that night.

“It was my first main event in ONE and I was ecstatic about it. I actually visualized these things and now they’re happening, and they’re coming off quicker than I anticipated,” said the ONE Super Series winner. “This just shows that once you give your all and work hard for the things you believe you can achieve, then they will happen.”

Adiwang started his MMA career with appearances in Universal Reality Combat Championship events while fighting under the Tribal Torigi banner.

He has since slowly made his way up, including switching gyms to Team Lakay and booking a six-figure contract from  ONE Championship by way of obliterating his rivals in a series of impressive performances at Rich Franklin’s ONE Warrior Series.

He once rode a seven-bout win streak that was only halted due to engaging in a match during a difficult time and could not overcome the distraction caused by his mother’s critical illness that eventually led to her demise.

This meteorologic climb to from a virtual unknown to one of today’s most explosive star overrides the dimming effect of the Brooks loss on the shine the “Thunder Kid” currently has.

And like Manny Pacquiao’s rising up attitude after the devastating Juan Manuel Marquez knockout loss, he also expects to come out stronger after this setback.

“I totally understand and accept that to become a champion, it’s not that easy and simple. And to be defeated is just a part of the process but also part of the learning, too. There are things that are meant to happen to make you grow and be a better version of yourself,” he said.

That could only mean a better and stronger Adiwang in 2022.

“What’s next for me is to do the right things and that is to go back to the game. There is no other way for me but up and I will rise again,” he said. “I’ve said that this is a part of my journey to become a champion and I will deal with it. I’ll take advantage of this setback as I believe nothing happens by chance.”

Surely, there will be lots of lessons to be learned from his defeat to the brash American fighter.

“This match was an eye-opener for me,” admitted the Team Lakay rising star. “The biggest lesson that I took home after facing Brooks was that in this high level of competition, one  mistake, no matter how small it is, can cost you a million. So you really need to be with yourself, to be 100-percent focused mentally and physically.”

Adiwang had every reason to feel like it. Before tapping out, he felt that Brooks was already running out of steam and was just patiently waiting for his time to strike.

“I knew I was about to finish him,” said Adiwang, not buying that his leg kick hit Brooks’ groin and instead, the American used it to his advantage to get a little bit of his air back and rest midway through round two. “It was clear that he was running out of air every time he held me down and that’s why I was letting him pin me down, for him to get tired. Then I’d capitalize and finish him. But he was lucky to get that submission before I got to end the game.”

Adiwang even argued that though it seems Brooks was able to show his power, it really wasn’t the case in person.

“It’s very different on the TV screens than it was live. He seems to be so strong when I watch him on screen but believe me, people in the arena can clearly see that he was gassed out and tired. This is what hurts me the most because I knew that if he did not get that submission or we did not have that break,  I knew that I was to finish him,” he said.

“That’s what I’m saying. I’m not making excuses here but in this already high level of game, a tiny single mistake can cost one a lot.”

An Igorot, a Cordilleran can easily to conclude Adiwang is not trashtalking nor kidding by simply listening carefully to how he exactly sounds and observing his body language during the post-fight interview.

He really believes he had the match in the bag if not for Brooks’ timely execution of the submission move that got the win for him.