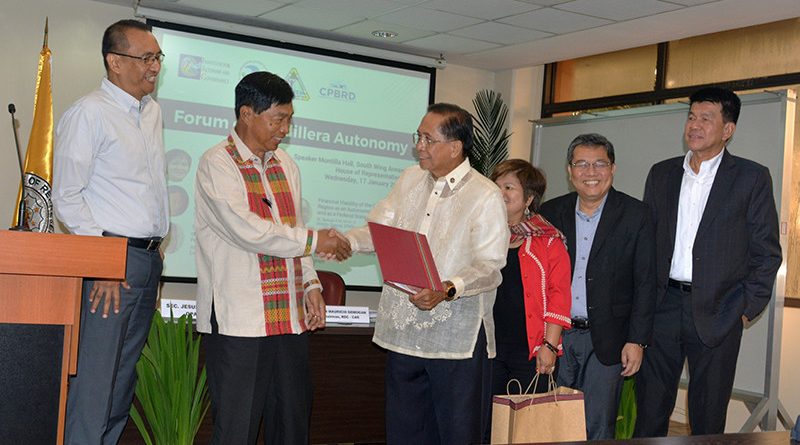 BAGUIO CITY  – Mayor Mauricio G. Domogan lauded the unrelenting and uncompromising efforts of Presidential Adviser on the Peace Process Jesus G. Dureza to champion the region’s renewed quest for autonomy with the Office of the President and the Congress of the Philippines, saying that autonomy advocates should sustain the gains of the clamor for self-governance through peaceful means.

The city chief executive said that once the Cordillera achieves autonomy status, the region will have more leverage in negotiating for a special autonomous region within the proposed North Luzon Federal State or the possibility of a separate Cordillera Federal State with equalizing provisions so that it will not be left out in terms of overall regional development.

“We should sustain our clamor for the establishment of an autonomous region in the Cordillera through peaceful means and allow our national leaders to appreciate our efforts and subsequently heed our aspirations for autonomy during the term of President Rodrigo R. Duterte because of the enabling environment provided for the said purpose,” Domogan stressed.

The Regional Development Council (RDC) in the Cordillera chaired by Domogan and the Office of the Presidential Adviser on the Peace Process, in close coordination with the Cotabato-based Institute of Autonomy and Governance (IAG), are forming a small advocacy group on autonomy with leaders of the House of Representatives and the Senate, aside from attempting to have another meeting with President Duterte to remind him of his commitment to certify House Bill (HB) 5343 or the bill that seeks to establish an autonomous region in the Cordillera as a priority administration measure.

Earlier, Senator Juan Miguel Zubiri, who is championing the Bangsamoro Basic Law in the Senate, assured Cordillera leaders during the 1st Congressional Forum on Autonomy that he will file the counterpart bill of the proposed Cordillera Organic Act in the Senate to keep the issue alive in the national scene.

Domogan explained the efforts of the RDC-CAR to reach out to their counterparts in Mindanao for a joint Bangsamoro and Cordillera stakeholders discussion on the BBL and the Cordillera autonomy law will definitely contribute in empowering lawmakers to consider acting on the two proposed bills side by side with each other because of the common constitutional provision mandating the establishment of autonomous regions in Muslim Mindanao and the Cordillera.

While it is true that decentralization will result to the empowerment of local governments through the devolution of powers and resources to the localities, he emphasized that the best option that the Cordillera must undertake is for the realization of autonomy using the pertinent provisions of the 1987 Constitution as basis before federalism will be put in place to allow the Cordillera to remain united.

Autonomy advocates remain firm on their stand that an autonomous region will move the people out from the shackles of poverty because of greater control of resources by the regional government with lesser restraint from outside forces.