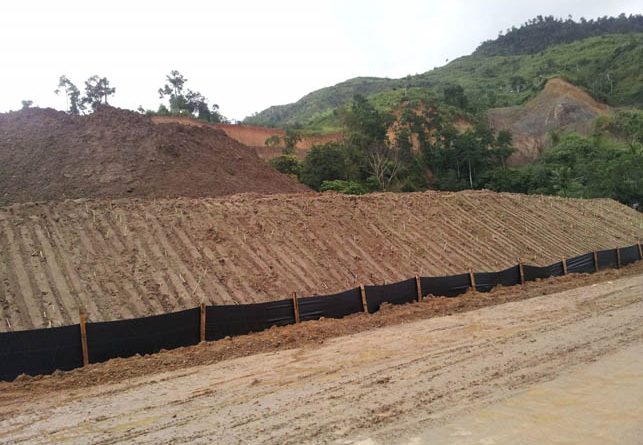 As the “demand” for gold and metal like molybdenum (a refractory metallic element used principally as an alloying agent in steel) in the market grew so was the desire of mining companies to operate anywhere as long as they find profit.

Runruno was not spared of this quest for precious metals. In 2011, FCF Minerals Corporation (FCF) was given the final permit to proceed with its Runruno Gold-Molybdenum Project in 3,093 hectares of land located in Barangay Runruno, Quezon, Nueva Vizcaya, Philippines.

Prior to 2011, the company already did its exploration work and started acquiring lands. The company hired people to convince the villagers to sell their lands. Promises of employment, livelihood, infrastructures and compensation made the offer more appealing.

While some were persuaded to sell their lands, some families refused to dispose of their lands because they knew that the mine will ruin not only their environment but their well-being and the future of their children. Besides, the company did not conduct proper consultation and greater information and dialogue to achieve a genuine consent from the people.

A woman neighbor of the Guillao family did not hesitate to resist the company’s plan to buy her land. When asked why she would not sell her land, she answered simply:

“Where do we go? This is our home. This is the legacy of our ancestors. This is where we get our day-to-day sustenance.”

Initially, the woman and her husband were asked how much they would sell their land. Without second thought, the couple gave their price that exceeded the company’s expectation. For the couple, the price was not meant to satisfy their personal interest but a declaration of refusal to sell their land.

However, the company did not heed the couple’s plea to keep off their land. Instead, they were asked to reconsider the company’s offer. The land is being eyed by the company to turn it into a complete service road.

Moved by a strong desire to protect their ancestral land from being taken away, the couple, in 2012,  together with their neighbors stood against FCF. Despite their few number, the people set up a barricade to secure their lands and homes.

Once the barricade was called off,  the protestors, including the couple, were arrested and put in jail. They were criminally charged for their role in the protest by FCF.

They were accused as “terrorists”- to be in possession of Molotov cocktails during the barricade. Without due process and with insufficient evidence, the couple and the others were held in jail for more than 10 months.

All the while that the protestors were in jail, the company hired people armed with assault rifles to occupy and secure the couple’s property as if the company already owned it.

At the very start, the so-called “negotiation”  between the company  and the couple was no negotiation.  In a terribly disadvantaged position with only their desire to hold on to their land with limited resources and in jail accused of a serious crime, the couple was subjected to the workings of a justice system that favored the powerful and moneyed.

In the meantime, the company continued in acquiring more lands, eating up what it can along the way.

The imprisonment of the couple and the other protestors created a collective trauma for the community. This broke the chain of solidarity that propelled them to protest and brought fear that crippled their souls to further question the injustice they were subjected to.

For the people whose lives depended on the land and were put behind bars without due process, the battle now was between an empty stomach and principles. With their lands being taken away without their consent and due process, and livelihoods destroyed, most villagers were felt so alone.

Since then, life in the community became volatile and engulfed with tensions as the company used the divide and rule tactics to pit villagers and communities against one another. Relationships between and among families were severed and this contributed more to the disintegration of solidarity and community spirit.

Meanwhile, despite the resistance of small-scale miners, their ball mills were demolished by police and agents of the National Bureau of Investigation. People relying on small-scale mining were left with no option but to look for alternative sources of livelihood. Small scale miners were even blamed for the polluted water sources and depleted freshwater supplies.

As of 2014, no significant action by the government was done to address the case of the people who were criminally charged during the barricade. The couple and the rest were temporarily released from prison by bailing themselves out. But what is more painful and distressing is the reality that they do not have a home to return to. All these had been taken over by FCF.

The corporate mining operation continues. FCF is now busy satisfying their production target of 96,700oz of gold per annum to keep track with their forecast of getting a payback within 3.5 years amidst unresolved land issues and violated rights.

The people in the community are still divided. Some are freely enjoying a “normal life” while others are still struggling to reclaim back their freedom and rebuild their lives. Others are in a financial distress and have accepted employment in the company. Some are even waiting for their luck to be among those who will be employed by the mining company. At the same time, those who were hired by the company are hoping for better wages and benefits.

When I look at the old photos again, all I can see is a bruised landscape, lost homes, lost history, and worst, bruised souls. The once treasured “ancestral home’’ among the Kalanguyas, Kan-kanaeys and Ibalois in Tayab, Runruno is now a memory.  To me, what happened in Runruno is a cautionary tale about the promises and perils of open–pit mining.

In my heart is hope that no more harm be made against peoples whose lives depend on the largess of the land:

Ruin not, ruin no more