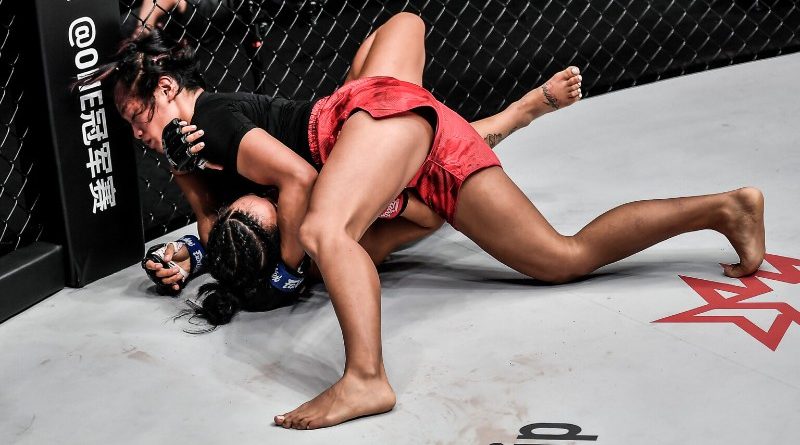 Jenelyn Olsim fired a right straight that found Bi Nguyen’s chin to score a knockdown in the second round and proceeded to hack a unanimous decision victory at ONE: BATTLEGROUND III, a tape-delayed event from the Singapore Indoor Stadium which airs this Friday night, August 27.

True to her prefight declaration, Olsim flashed a complete game but her striking prowess turned the tide on her favor with the resounding dominance in the second round initiated by the knockdown.

The fifth-ranked strawweight contender started the second firing jabs and hooks as both fighters danced around looking for openings. After exchanging hits for quite a while, Olsim fired a left jab that set the well-timed punch which found its target and send the Vietnamese-American sprawling on the mat.

Olsim then quickly proceeded to take dominant position on the ground. She subsequently decided not to over commit and just retain the active position.

Instead, she concentrated on scattering ground and pound with well-timed elbows and body shots to dominate the round.

Round one was unusual for the fantastic strike fighters as they instead engaged in a heated exchange of submission attempts in hot contested back and forth ground action.

Nguyen would initiate multiple takedowns but Olsim would constantly turn them into submission attempts. She attempted multiple submissions including an armbar, a gogoplata,  a kimura and some head locks.

She finished the round on side control while dishing ground and pound after reversing a takedown that resulted her being pushed against the Circle Wall.

Olsim and Head Coach Mark Sangiao knew they had the upper hand and hatch a gameplan to keep Nguyen at bay in the third.

They were successful in the first three minutes as both fighters went back to their striking game and exchanged hits on their feet early in the round.

Nguyen’s persistence, however, lead her to use Olsim’s momentum to score another takedown and land in side control.

Like in the earlier rounds, the “Killer Bee” could not sustain the ground attack as Olsim this time powered out and forced the action back on their feet. As they separated, the Team Lakay phenom landed a head kick that found its target.

Nguyen, sensing she’s behind the scorecards, made last ditched efforts to steal the fight and completed two takedowns. She finished the round with ground and pound and raised her arms believing she’s done enough to reverse the deficit.

However, the third was not a clear Nguyen round as Olsim was equally excellent in defending the take down attempts and landed clean shots of her own during the exchanges.

All that last flurry did was to close the gap that was built by Olsim’s dominance on striking, solid submission defense and counter submission attempts throughout the bout.

Olsim improved her record to 5-2. She is 3-1 in ONE Championship fights and 2-0 in the Circle. She is coming off an impressive guillotine choke induced submission over Maira Mazar before this fight.

Meanwhile, Nguyen drops to 6-7. She is now 3-4 under the ONE banner. Her losses includes one against Stamp Fairtex and Jihin Radzuan.

Olsim will now face debuting American Grace Cleveland at ONE Championship’s historic all-women’s fight card, ONE: EMPOWER on September 3. That bout will serve as an alternate for the highly anticipated ONE Women’s Atomweight World Grand Prix.

5       5SharesThis post has already been read 4498 times!The city is looking for a private entity that is willing to partner