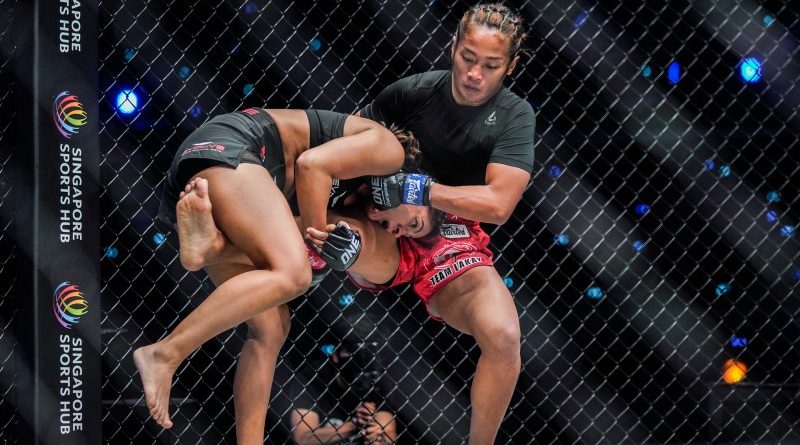 Team Lakay’s Jenelyn Olsim came with a respectable ground game but her going up against one of the best grapplers in ONE Championship left her short of advancing in the ONE Championship Women’s Atomweight World Grand Prix.

Olsim made the most of what she got but lost a fight that was mostly played on the mat via unanimous decision to Indian fighter Rita Phogat in one of the grand prix’s semifinal matches on October 28, 2021 at the Singapore Indoor Stadium.

The Igorot fighter was doing well in the early stages of the first round with timely leg hits and punches until Phogat decided to go for the take down.

Olsim thwarted some of them but Phogat would eventually got to assert her specialty to send the fight most of the time.

Once there, she easily dominated the action in all three rounds.

In addition, Phogat delivered the highlight of the match with an overhead slam in the second and knee ground and pound in the third.

She also defended against multiple attempts of the Team Lakay rising star to execute armbar and triangle submission.

The Benguet native got one last chance to cover some ground when she got back to her feet late in the third and resumed to dish strikes but she left an opening for Phogat to take the fight back to the ground and utilized her ground skills to avert the late scare.

The loss dropped Olsim’s MMA fight record to  5-3. She replace Phogat’s original opponent Itsuki Hirata, who had to pull out due to medical issues, on just four days notice.

Phogat will battle Thailand’s Stamp Fairtex, the winner of the other semis match over Julie Mezabarba in the finals on December 3.

The winner will be given a shot for the title of defending ONE Women’s Atomweight champion Angela Lee.

17       17SharesThis post has already been read 990 times!The ongoing negotiations between the members of the city’s Public Private Partnership for