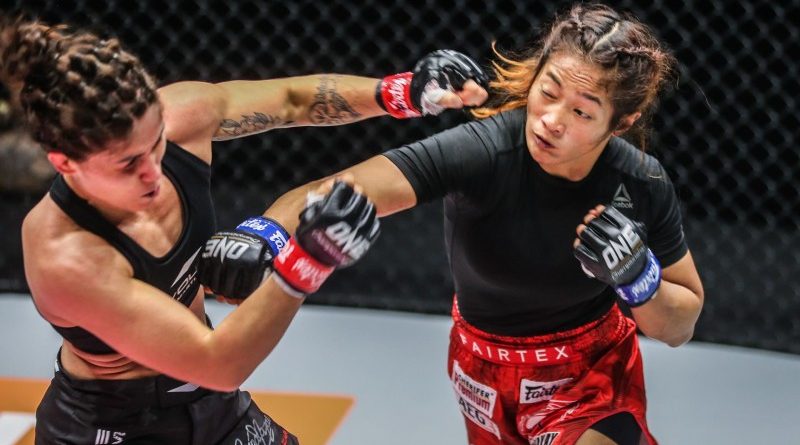 Olsim, one of Team Lakay’s next generation stars, will be looking for a spot in the Grand Prix after the promotion penciled her for an alternate bout match with Malaysian grappler Jihin Radzuan during the tape-delayed  Nextgen II scheduled for broadcast on November 12, 2021 to be held at the Singapore Indoor Stadium.

Olsim was earlier granted a ticket to fight the United States’ Grace “Thai Kitten” Cleveland in one of two alternate bouts during ONE: EMPOWER on September 3 but, unfortunately, Cleveland was forced to pull out after complaining of perpetual dizziness and the fight being scrapped.

Olsim is on a roll as she registered two sensational victories at straweight heading into the fight.

She made a rousing ONE main roster debut with an impressive guillotine choke induced submission over Maira Mazar on March 19, 2021 then took out Bi Nguyen with an unanimous decision that was highlighted by a second round knockout from a right straight to the chin on August 27, 2021.

After the twin victories and notwithstanding her being ranked fifth contender in the division, she made another brilliant move by moving down to atomweight in order to face its roster stacked with some of the promotion’s best lady fighters including Angela Lee, Denice Zamboanga and Stamp Fairtex.

Olsim expressed her satisfaction in getting the opportunity even in an alternate situation. “This is one of the main reasons why I moved weight classes, because I really wanted to be part of the Grand Prix,” she said.

Alternate bouts are fights that ONE formulated for the winner to take the spot of a fighter who suddenly could not go due to unforeseen circumstances.

She, however, faces a vengeful Radzuan, who lost to  Filipino fighters Zamboanga and Gina Iniong, Olsim’s senior at Team Lakay, in the past.

Olsim in entering the fight with a record of 5-2. She is 3-1 in ONE Championship fights and 2-0 in the Circle.

Olsim will be looking to appear in the Grand Prix at the expense of “The Shadow Cat”, like how Julie Mezabarba did by beating Mei Yamaguchi.

Ironically, Mezabarba will be taking over the spot of Seo Hee Ham, who was forced to withdraw due to an injury, instead of Ham’s original opponent Denice Zamboanga, who heavily protested the result of the bout.

The two were reportedly scheduled to meet in an alternate bout before Ham announced her injury.

This post has already been read 836 times!Biscuit and snack food giant Rebisco is all-out for Philippine volleyball. The main