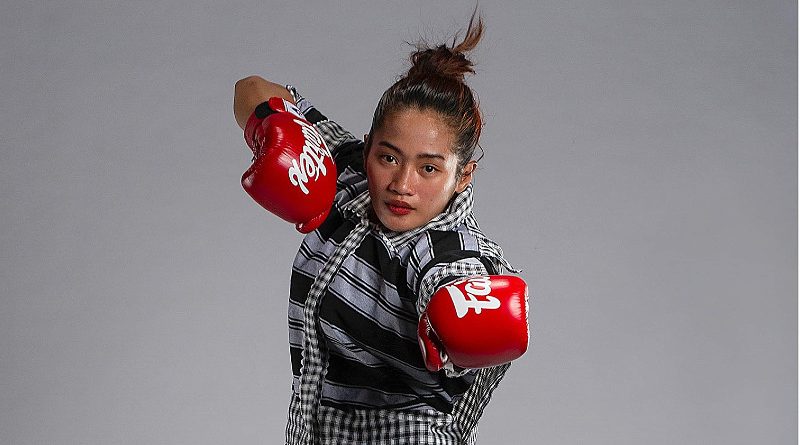 Jenelyn Olsim is ready to show her wares in the biggest stage this coming March as she makes her debut wearing the color red of Asia’s top mixed martial arts team, Team Lakay, against an experienced fighter.

Jenelyn Olsim will make her debut with One Championship on March 19 when she faces Brazilian Maira Mazar as one of the undercards in the ONE Fists of Fury III in Singapore which will be headlined by lightweight kickboxing championship fight between Regian Eersel of Suriname and Italian Mustapha Haida.

In his post on Facebook, Team Lakay top honcho Mark Sangiao wrote: “Get ready when ‘The Graceful’ of Team Lakay, Jenelyn Olsim, graces the war stage on her fight debut in ONE Championship this 19 March!”

“(I am) so excited and preparing with the team and coach Mark Sangiao, I am blessed and thankful to God be the Glory,” Olsim, who won a silver in the last Southeast Asian Games, wrote in her Facebook wall.

It will be the first fight of the 20 year old Olsim, who joined the Team Lakay stable early last year and after winning a silver medal in the SEAG in kickboxing where Sangiao is also a coach and regional director of the Samahang Kickboxing ng Pilipinas – Northern Luzon.

In her debut, she will face a veteran fighter in Mazar who holds a 7-3 win-loss card. Mazar is fresh from her win via technical knockout by way of punches on Jung Yoon Choi in The Matrix series in October 20 last year as she bounced back from submission, scarf hold armlock, loss to Ayaka Miura in January 10 also last year.

In the 5.5” Sao Paolo, Brazil native’s seven wins, five came via TKO, one through submission and one by decision. Mazar whose losses came via submission, started out in wushu sanda before taking up Brazilian jiujitsu and eventually mixed martial arts.

“She (Mazar) is a very experienced fighter basing on her record. She has fought a lot of experienced and tough fighters too, like for example, ‘yung champion ng UFC (Zhang Weili). She is good in wrestling basing on her last fight,” said Olsim in Team Lakay’s YouTube vlog.

“Inaral namin ‘yung mga galaw niya from her fights. Siyempre pinaghandaan namin ‘to. We have prepared for this fight that’s why I’m very excited. Me and my teammates, coach Mark Sangiao prepared for this fight because this will be my very first fight in the big stage, ONE Championship. I just hope na ma-showcase ko lahat ng techniques na inaral ko sa training namin.” added Olsim, who joined older brother Jerry at Team Lakay in June last year.

Reigning ONE lightweight kickboxing champion Eersel will face the Moroccan-Italian Haida, which ONE said is a tougher opponent for the champion who was supposed to meet the fifth ranked Islam Murtazaev in the main event, but was forced to withdraw.

DEBUT for Jenelyn Olsim in the ONE Championship this March 19 where she will face veteran Maira Mazar.