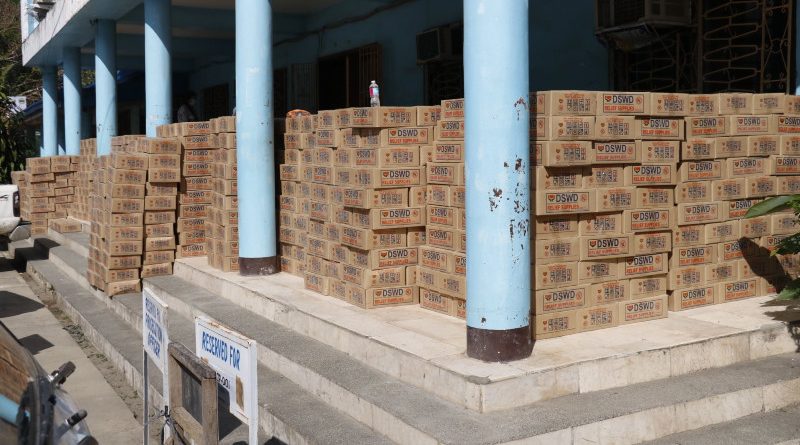 TABUK CITY, Kalinga – The Cordillera office of the Department of Social Welfare and Development (DSWD-CAR) has released a total of 5,000 relief packs in response to the request of Mayor Darwin C. Estrañero, thru Susana Daluping of the City Social and Welfare Development Office (CSWDO), to help assist the 5 Barangays placed under granular lockdowns for 14 days.

Staff of DSWD-CAR, in coordination with personnel of CSWDO, facilitated the release of 830 relief packs for Barangays Dagupan Centro (347) and Dagupan West (483).

Due to the weather, the hauling of the rest of the relief packs was stalled but the CSWDO staff will resume distribution to the three remaining barangays next week.

Also included in the request are relief packs to be given to COVID-19 positive cases in other barangays of the city per line list of the city health office.

It will be recalled that Brgy. Lacnog East received the allocated relief packs for their constituents last week totaling 1,900 packs distributed to all households within the Barangay.

Mayor Darwin C. Estrañero is greatly pleased with the immediate response of DSWD-CAR saying their swift action to his request will immensely help the residents of the Barangays placed under granular lockdowns. “As movement is restricted in those areas, the assistance will indeed be a welcome relief to the people. I hope all agencies are as understanding and as efficient as DSWD-CAR. Likewise, I am also grateful for the support of the department’s provincial  office as their joint efforts with CSWDO in monitoring the barangays and their assistance in ensuring our request is heard by the right people in the region has produced these swift results,” he further said.

Despite these relief packs, the Mayor has once again repeated his appeal for people to cooperate and strictly follow protocols.

This post has already been read 473 times!TABUK CITY, Kalinga – With the voter’s registration extended, the Commission on Elections