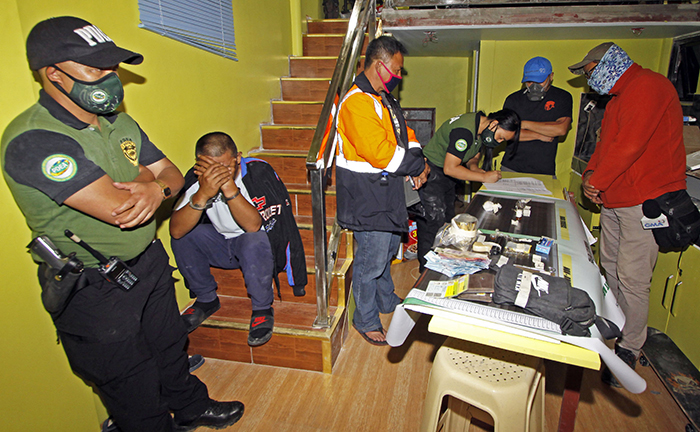 BAGUIO CITY (July 15, 2020) —  A notorious drug cartel big boss fell in a raid at his hideout atop a hill at San Carlos Heights, Irisan Tuesday night.

Federico “Eric” Oliveros, 38, who took over leadership of his father’s “Oliveros drug cartel” operating in Baguio City, the highland region and neighboring provinces, readily gave up though when Philippine Drug Enforcement Agency-Baguio operatives aided by National Bureau of Investigation-Cordillera agents, Cordillera police intelligence operatives and Baguio policemen surprised him inside his home and seized at least P400,000 worth of shabu, liquid shabu, several drug paraphernalia, a 25 caliber pistol and bullets from his bedroom.

Oliveros, according to PDEA-Baguio chief IA5 Michael Mercader, is the son of Baguio’s infamous drug kingpin “Bernardo ‘Benjie’ Oliveros, who got a life term and was fined P10 million for selling drugs in 2013.

The elder Oliveros, said to be in the drug trade for decades and was only collared by anti-narcotics operatives on September 2011, was convicted for 12-20 years jail term in 2013 by Judge Antonio Reyes of the Baguio City drug court.

From his humble beginning as a ‘stowaway,’  he became Baguio City’s most powerful drug personality for a very long time, said newly appointed PDEA-Cordillera director Gil Castro, who was then the drug agency’s assistant regional director who pounced on the elder Oliveros, who had already been a key player in the shabu trade in Baguio City by the late 1990’s.

More than two years and five months later, on June 11, 2011, the younger Oliveros was again collared in Alfonso Tabora here, by PDEA agents with .41 gram of shabu but was acquitted on July 9, 2012.

The younger Oliveros, who had also been hunted and caught for frustrated murder, was last captured by PDEA agents on May 21, 2013, which was only over 10 months after his latest acquittal mid 2012, at New Lucban here, with 2.18 grams of shabu.  He then pleaded guilty and spent several years in prison and only to lead his father’s drug cartel after his release several years ago “with more viciousness and more dangerous” than his elder, Director Castro said.

The younger Oliveros will be charged this time for possession of illegal drugs including the liquified form of meth, said to be deadlier and more damaging to the brain cells that makes users completely lost control of the realities,” Director Castro said, adding, charges will include possession of drug paraphernalia indicating he caters to others’ drug needs.

If ever the younger Oliveros bargains again to the court for a lesser drug conviction,  Dir. Castro said, “PDEA will oppose it”.*

1     1ShareThis post has already been read 3011 times!BAUKO, Mountain Province– The municipal government recently ordered a total ban on the