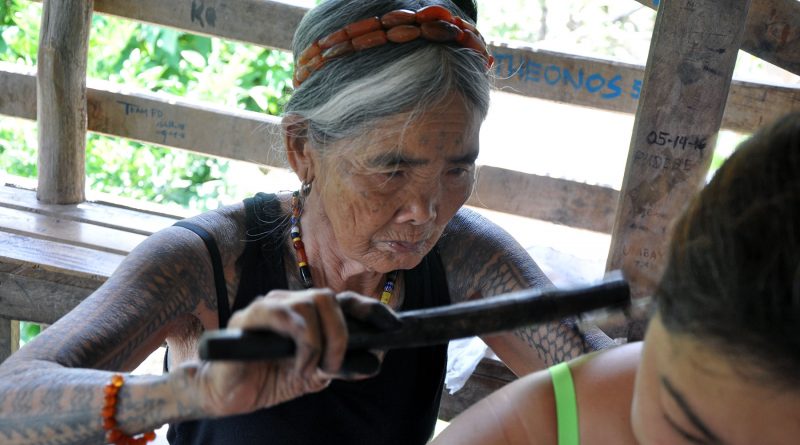 BAGUIO CITY – Following the information of a Memorandum of Agreement (MOA) executed between world renowned Kalinga tattoo artist, Apo Whang-od and VANS Philippines, the National Commission of Indigenous Peoples (NCIP) requested to hold in abeyance the release of latter’s clothing apparel incorporating the tattoo “Python” design to the market.

NCIP was made aware of the MOA when VANS Philippines, on November 2020, wrote to the former that they will be releasing their clothing apparel this December 2020. Such clothing apparel incorporated the “Python” tattoo design of the Kalinga Indigenous Peoples (IPs), and the same was the agreement stipulated in the MOA entered into by Whang-od.

Upon knowledge of the said MOA, NCIP quickly organized a validation team composed by NCIP – Kalinga personnel on November 2020. The validation team were able to sit and discuss with Whang-od. The former explained in their local language the MOA which Whang-od entered into. The validation process by NCIP – Kalinga yielded that; 1) Whang-od was not fully aware of the stipulations or buy-out content of the MOA she signed, 2) No amount of 800 USD was received by her, and most importantly, 3) Whang-od acknowledged and affirmed that no single individual can claim ownership of the tattoo designs.

It can be recalled that a similar incident happened sometime 2019, when NEW ERA Co., had Whang-od signed a MOA in order for the former to use the tattoo designs of the Kalinga People in their hat products. NEW ERA Co., was then directed by NCIP–CAR to go through the process of the Free Prior and Informed Consent (FPIC) and obtain first consent from the Kalinga ICC/IPs before they can appropriate the tattoo designs in their products.

NEW ERA Co., then conformed to follow the FPIC process and is currently seeking the consent of the Kalinga ICCs/IPs for the utilization of their tattoo designs. The same was momentarily stalled due to the global pandemic.

NCIP – CAR reiterated that ownership of the tattoo designs is not solely lodged to Whang-od but to the entirety of the Kalinga ICCs as one single collective community.

Meanwhile, NCIP created a Task Force headed by the commission’s Legal Affairs Office (LAO) to look into these appropriations of IKSPs. The Task Force will be studying similar concerns throughout the nation and will be giving appropriate actions not limited to filing of cases if necessary.

VANS Philippines and NEW ERA Co., have yet to secure consent from the Kalinga ICCs/IPs and both halted in the release of their clothing apparels containing the tattoo designs of the Kalinga people.

NCIP–CAR Regional Director, Atty. Marlon Bosantog urged the IP universe of CAR to be vigilantly on lookout for similar concerns and vowed to open the doors of NCIP–CAR for any needed assistance.