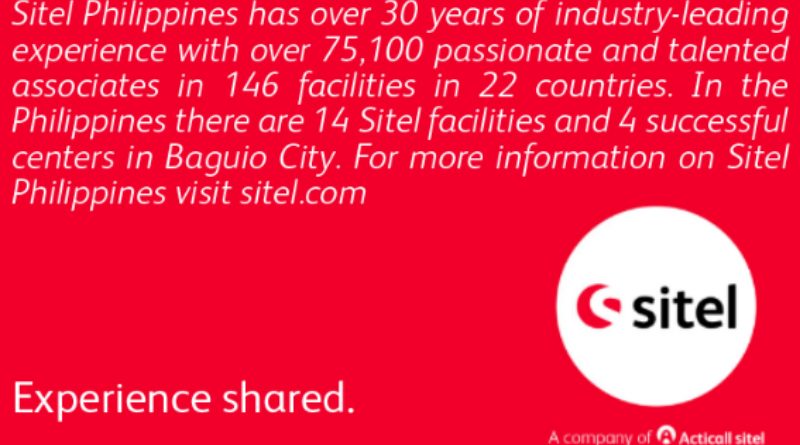 BAGUIO CITY  – Sitel Philippines expressed its gratitude to the Baguio City Council chaired by Vice Mayor Edison Bilog for providing the company a proper venue to clarify false allegations regarding displacement of employees.

Sitel Vice President of Operations for Northern Luzon Michael dela Peña, in a council hearing on Monday, July 31 said, “Sitel Philippines is a law-abiding and highly respected BPO company in the Philippines employing thousands of employees across its BPO centers in Metro Manila, Baguio, Tarlac, and Palawan. In Baguio City, we are considered the biggest employer, with four customer experience centers.”

During the same hearing, Dela Peña also expressed disappointment over erroneous and unverified reports of a local daily on the displacement. He pointed out that contrary to false claims, no Sitel employee is currently being displaced, and Sitel’s Baguio workforce has even increased in the past year.

He emphasized that Sitel Philippines is a 5-time IBPAP Company/Employer of the Year and 3-time Hall of Fame “Outstanding Employer” awardee by the Philippine Economic Zone Authority (PEZA) It is also one of the very few recipients of the Tripartite Certificate of Compliance with Labor Standards, for exemplary compliance with the provisions of General Labor Standards, Occupational Safety and Health Standards, and Child Labor Law. Sitel regularly undergoes assessments from the Department of Labor and Employment and has consistently received full compliance certificates. The Baguio City government has also recognized Sitel as a True Partner of Baguio City.

Meanwhile, Sitel Philippines also received a firm statement of support from Philippine Economic Zone Authority (PEZA) Director General Charito Plaza, who said that “Sitel is a BPO firm with a good reputation and record in the Philippines. The company has greatly contributed to the development of Baguio City through its social development initiatives and business expansion programs bringing thousands of employment opportunities to the people of the Cordillera region.”