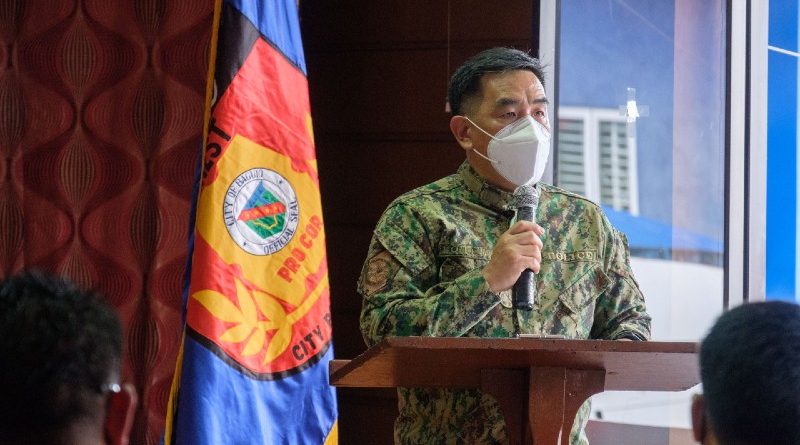 The newly installed City Director of the Baguio City Police Office (BCPO) assured the continuous and sustained implementation of the existing various programs, projects and activities that helped in maintain law and order in the country’s undisputed Summer Capital.

BCPO City Director Police Col. Glen Lonogan stated that aside from the ongoing implementation of the border controls to contain the spread of the dreaded Coronavirus Disease 2019 (COVID-19), the 1,200-strong law enforcers will continue to discharge their assigned duties and responsibilities on anti-criminality, anti-insurgency, anti-insurgency, peacekeeping, anti-drug campaign and even enhancing cleanliness and greenery within headquarters and police stations.

He admitted it is a challenging task to exceed the accomplishments of his predecessor but he will do his best to ensure the implementation of existing programs and the introduction of innovations that will improve the same to sustain decent state of law and order in the city.

The police officer stipulated it will be business as usual in the different police stations and the appropriate innovations shall be introduced on the existing peacekeeping initiatives and other related programs when it is necessary to do so, but for as long as the same is working, then there is no urgent need to fix it to avoid interrupting the effective and efficient delivery of services.

According to him, the BCPO will be steadfast in the sustained and continuous implementation of the various programs, projects and activities that the law enforcement office has been tasked to enforce so that nothing will be left behind as the overall intent is to ensure law and order in the community so that the city will remain as a good place to study, work, live and do business.

Lonogan appealed to the city residents to continue cooperating with the law enforcers in the ongoing implementation of stricter border controls and compliance to the minimum public health standards to prevent any untoward incident that will cause another surge in the number of COVID cases that might seriously overwhelm the local health care system and stress the frontliners like them.

While the crime rate in the city has significantly decreased at the height of the pandemic and the Luzonwide lockdown last year, the BCPO official asserted that law enforcers and the people should not be complacent because crimes can happen anytime and everyone must be vigilant on what is happening in their respective communities for crimes to be immediately reported to the concerned authorities for proper and immediate action to prevent life and limb from being compromised.

Lonogan rallied concerned sectors in the city to extend their utmost support to the BCPO to ensure that law enforcers can effectively and efficiently discharge their assigned duties and responsibilities that will sustain the prevailing law and order situation of the city.

By Dexter A. See
Photo by Neil Clark Ongchangco

This post has already been read 817 times!The city is not yet inclined to open inter-regional public transportation to avoid