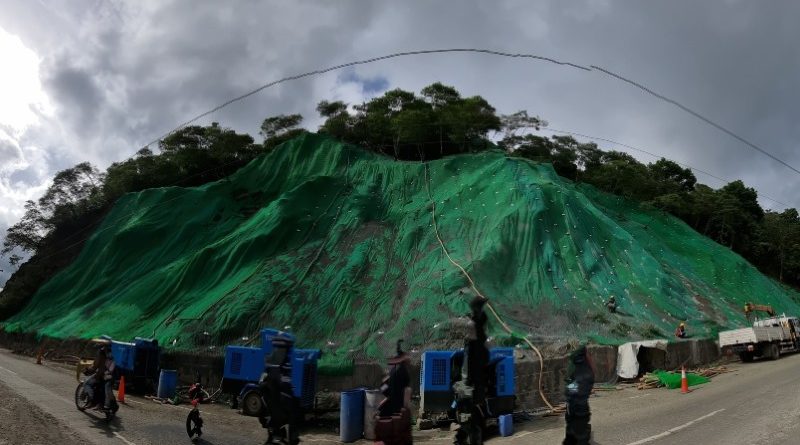 TABUK CITY, Kalinga – An official of the Department of Public Works and Highways – Lower Kalinga Engineering District (DPWH-LKED) rebuffed the negative perception being projected by some self-styled individuals against the agency’s rock netting projects that had been implemented in the identified slide-prone and unstable slopes in the different parts of the province within its areas of jurisdiction.

DPWH-LKED officer-in-charge Engr. Ruby Uyam disclosed that the agency was able to implement 4 rock netting projects along different sections of the national roads that is within the agency’s jurisdiction and that such projects serve as sloe protection in slide-prone areas.

She pointed out that the completed rock netting projects have provided a significant impact on public safety as they now provide support to the unstable slope along the national roads thereby avoiding the occurrence of future accidents and soil erosion or landslides that cause the untimely closure of roads, especially during the rainy season and natural calamities.

Uyam stated that the public works department adopted the so-called active protection system (APS) in the implementation of slope protection projects all over the country to prevent soil erosion and rock fall that pose a serious threat to the safety of motorists passing through the various national roads.

The district engineer asserted that the primordial purpose of the rock netting projects is to provide safety and protection mechanisms for motorists and passersby and the prevent the unnecessary closure of roads to vehicular traffic at the height of heavy rains during the rainy season.

She explained that rock netting is a new technology in the department’s slope protection project as the same is geared towards preventing soil erosion and rock fall from the unstable mountain slopes and subsequently provide the appropriate support to us table slopes along roads.

According to her, rock netting is a new and convenient technique of slope protection as the same does not need massive ground excavation unlike what had been happening in the past and that it saves time in the installation process.

Further, she claimed that the technique is also eco-friendly since the system includes hydro seeding which has environmental benefits by retaining the form of natural ground.

Under the aforesaid system, the high tensils wire mesh will keep the soil and rock mass in place and prevents debris and rocks from falling on roads which can prevent damage on pavements and inflict injuries to motorists and passersby.

She refuted the allegation that the rock netting projects are detrimental to the state of the environment, saying that the photographs on the vegetation that are present in the completed projects as a result of hydro seeding is a concrete evidence to negate such unfounded observations. By HENT

This post has already been read 753 times!TABUK CITY, Kalinga – With the voter’s registration extended, the Commission on Elections