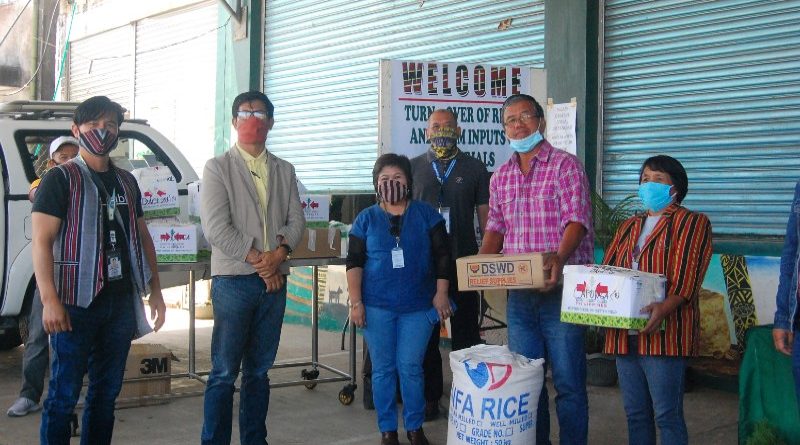 TUBLAY, Benguet – Sacks of rice, seeds and planting materials, and food packs were turned over to eight barangays in Tublay last June 26. This started off from a private sector donation coursed through Regional Development Council Vice-Chair and NEDA-CAR Regional Director Milagros A. Rimando who then coordinated with other government agencies in the region for further assistance. DA-CAR and DSWD-CAR quickly responded to the spontaneous request and joined the activity.

Municipal and barangay officials along with members of the barangay agricultural and fishery council (BAFC) gathered for the turnover with Tublay mayor Armando I. Lauro welcoming the participants and thanking the guests present despite the short notice. Director Rimando provided a rationale behind the activity detailing that the donations from Cordillerans based in the United States set forth the supposedly small turnover of rice purchased from the donations to barangays in Tublay which eventually became an avenue for government agencies in the region to provide other assistance in the municipality.

The turnover was also attended by Dir. Danilo P. Daguio, the Regional Technical Director of DA-RFO-CAR, and Regional Director Leo L. Quintilla of DSWD-CAR. Both took the chance to orient and update the participants about their ongoing programs. Director Daguio discussed DA’s ALPAS Program and Plant, Plant, Plant Program which were specifically implemented for the agricultural sector in response to the COVID-19 situation. He also discussed DA’s Kadiwa Express that successfully addressed the dumping issues in the region and the loan programs offered by DA such as the Rice Farmers Financial Assistance (RFFA) Program, SURE Aid Program, and ACEF Lending Program among others. He mentioned that a post-harvest processing center is to be put up in the Benguet State University (BSU) following a PHP 25 million budget given by the DA central office.

Director Quintilla similarly provided updates on the Social Amelioration Program (SAP) implemented by the DSWD-CAR. He noted that around 400 are waitlisted for the first tranche of social amelioration in Benguet and are scheduled to receive their financial assistance on July 2. The second tranche of SAP will be distributed by the DSWD-CAR in coordination with LGUs which may be released through a digital transfer for easier distribution aside from payouts in remote areas.

Earlier in May, NEDA-CAR led the drafting of the region’s Recovery and Resilience Plan (RRP) which aimed to create safer, adaptive, and more resilient Cordillera communities following the effects of the COVID-19 pandemic. Director Quintilla recognized the role of cultural practices in the Cordillera in limiting the spread of COVID-19 in the region and later ended his speech by saying “virus ka lang, Cordilleran kami” – a fitting statement that captures Cordillera resiliency.

After the turnover, a short open forum was also conducted. Municipal IPMR and autonomy speaker Dr. Peter Cosalan expressed his concern over the continued chicken dung transportation to and from COVID-affected areas in the municipality. He added that millions of funds may have been unnecessarily spent by farmers on chicken dung despite the lack of scientific evidence to prove that these can be used as fertilizer. Director Daguio answered by explaining that chicken dung function as a soil conditioner and Director Rimando further added that BSU may be asked to research the agronomic and economic use of chicken dung.

The activity displayed one of the good practices in the region as identified by Director Quintilla which is the close coordination among regional directors in the Cordillera. NEDA-CAR serves as the technical secretariat of the (Baguio City, La Trinidad, Itogon, Sablan, Tuba, Tublay) BLISTT Governing Council and is currently preparing a BLISTT action agenda.

This post has already been read 153 times!If there is one who is familiar with Autonomy, it would be the