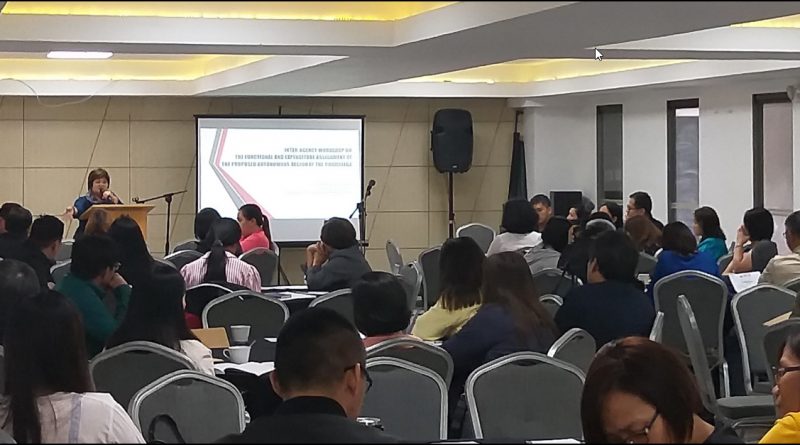 The study aims to determine fiscal viability based on the most recent draft of the Cordillera Organic Act, the House Bill 5343 of the 17th Congress. It aims to forecast the expenditure and revenue generation capacity of the Autonomous Region of the Cordillera (ARC) for its first 10 years. NEDA commissioned the study to provide policy recommendations to ensure the fiscal viability of the ARC.

“This will help determine the future of our region,” NEDA-CAR Regional Director and Regional Development Council Vice Chair Milagros Rimando said of the event. The workshop discussed what functions can and should be devolved to the ARC based on the intent of regional autonomy.

She added the workshop is important as NEDA-CAR has encountered numerous queries during IEC fora and among Cordillera leaders on fiscal management in an autonomous set-up. She said the common perspective of an autonomous region is less than positive as the only previous example, the Autonomous Region of Muslim Mindanao (ARMM), was perceived as a failed attempt. “ARMM had a history of fiscal concerns,” she said.

Earlier, RDC officials visited the Bangsamoro Autonomous Region in Muslim Mindanao (BARMM) to learn about the financial implementation and operation of the new autonomous region and the lessons learned from the previous ARMM. BARMM leaders and autonomy advocates from the Institute of Autonomy and Governance (IAG) and the Bangsamoro Transition Authority (BTA) also showed their support to the Cordillera region’s pursuit of autonomy.

During the visit, Parliament member Baintan Adil-Ampatuan shared that “ARMM is a sad story of devolution. The structures were skeletal; it had no program funds and many functions were retained by the national government.”

“In the Organic Law on the BARMM, powers are defined and clearly devolved. In our case in the ARC, there can be several options for our devolution based on our proposed bill,” Rimando said during the workshop.

During the workshop, the participants who were grouped into the sectors of social development, infrastructure, governance and administration, and environment and natural resources, tackled the gaps in current government programs, activities, and projects, modification of the current budget structure, review of the agencies’ plans for the next 10 years, and estimation of the ARC budget.

The fiscal viability study is expected to conclude this December.

PHOTO: Devolution – NEDA-CAR Regional Director Milagros Rimando (standing, in blue) begins the discussion on the functions and expenditure of devolved powers of the Autonomous Region of the Cordillera (ARC).