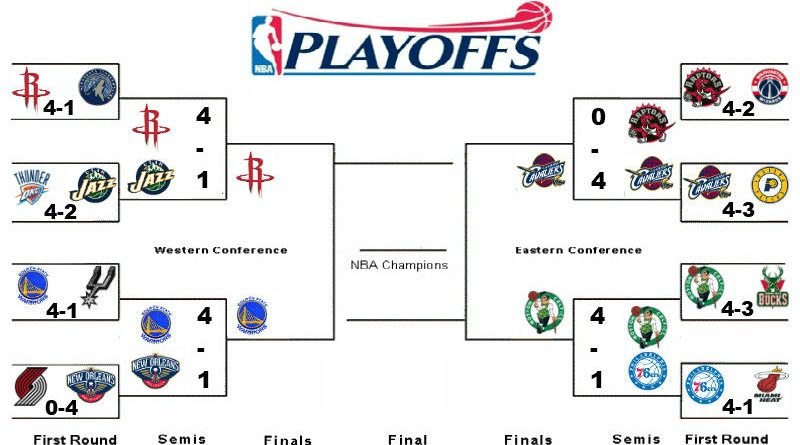 The NBA playoffs this year is giving a glimpse of what is to come. Let me change that. It is already the dawn of a new era, post Lebron James, Kevin Durant and Stephen Curry. (I know James is just 33, Durant 29, and Curry 30; and they are still far from retiring from playing active ball.) But truth is, the young stars that are headlining winning teams in these playoffs so far will take over the league stardom from these established stars in a short while. It may have already began, for all we know.

Here is the first of a multi-part series:

If there is a thing I regret in predicting the New Orleans Pelicans – Portland Trailblazers series was to put my foot forward of my stance why I think the Pelicans were the overwhelming favorites in this one.

I originally anticipated that this series will go in seven games in favor of the Pelicans because I think the games will be close and Damian Lilard’s being clutch should give some games to Portland.

But I felt the Pelicans will come out winning this one no matter what.

The Pelicans, instead, won by lopsided fashion. As we al already know, they swept the Blazers.

I also thought Rajon Rondo and Jrue Joliday will become vital cogs in closing the series.

But it is still Anthony Davis that would have to push this team through.

The success of the Pelicans mainly depends on Davis, on how far he can take this team deep into the playoffs.

Davis has been in the league for a good six years, all as the Alpha Male with New Orleans. He could not get his team to become a consistent playoff contender.

Of the six seasons he played, the Pelicans reached the playoffs only once, during the 2014-15 season, as the eight seed. As expected, they were easily disposed by then top seed and eventual champion Golden State by a sweep.

Davis, however, became his own man this year, carrying the Pelicans on his back to a playoffs spot and drawing a favorable opponent in the first round in the process.

Sans DeMarcus Cousins, who was once thought to be the saving grace of the Pelicans but is out of the year due to an ACL injury, Davis towed the Pelicans to the sixth seed in a very tight race and by result of the draw, avoided the Thunder or the Jazz as their first round opponent.

I knew then that will I belong to an only few who will have the Pelicans winning this series.

It was because of what I perceived as a mismatch.

It will be a Lilard – CJ McCullom – Jusuf Nurkic vs Rondo-Holiday-Davis duel, I saw Davis dominating Nurkic of both ends of the floor and Rajon Rondo becoming a playoff asset like what he was with Chicago last year.

Jrue Holiday’s defense on Lilard did surprise me. Him putting the handcuffs on Damian Lilard as well as pouring significant contributions in offense, which should make him a potential winner of “the breakout star award” of this year’s playoffs, was the key to the sweep instead of it going longer.

Rondo turned out to be the stabilizer of the Pelicans offense as I thought he would.

But, having said that, it was still Davis who dictated the Pelicans success.

Davis also showed traces of becoming a solid alpha male as he displayed intensity when he tried to enter the floor during a scuffle.

H also allowed the rest of the Pelican bench to prevent him from causing an incident that would have resulted in him receiving a flagrant foul and an ejection.

For his part, Rondo indeed accomplished what he could not last year for the Bulls after being sidelined by an injury. His eight seeded Bulls were leading then top seed Celtics 2-0, taking the first two games in Boston but had to watch his team from the bench yield the lead by losing the next four.

Rondo averaged 13.25 assists and 7.5 rebounds in this year’s series. Holiday averaged 27.75 points and 6.5 assists per game plus the defensive gem on Lilard

In finishing the Blazers, Davis (47 points) and Holiday (41) became the first teammates to score 40 or more in a playoff game since James and Kyrie Irving did it in 2016. The last one to do it before these foursome were Reggie Miller and Jalen Rose for Indiana in 2000, according to ESPN.

For all their trouble, their prize is rematch with the Golden State Warriors, who are leading the San Antonio Spurs, 3-0, in the second round.

I am eager to see how this more matured Davis stack up against the Warriors in a rematch during the next round, especially if Holiday can do a repeat performance on Stephen Curry and/or Klay Thompson.