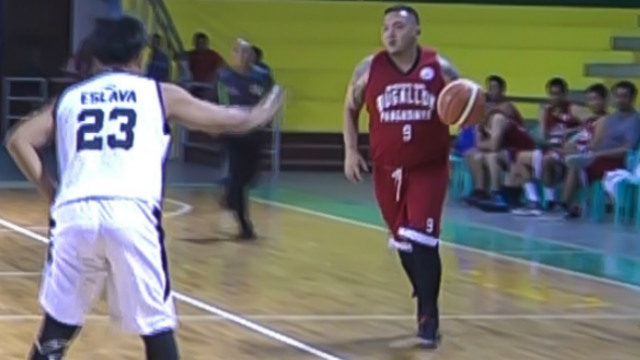 LINGAYEN, Pangasinan – Bugallon chief executive, Mayor Jumel Anthony I. Espino, led his team to a win by a 9-point margin against Urdaneta City in the opening of  the basketball quarterfinal rounds of the 1st Inter-LGU Unity Games recently at the Calasiao gymnasium.

The Bugallon team has a powerful line up spearheaded by the Mayor who managed to deliver barrage of shots to include two three-pointers in the 1st quarter.

Meanwhile, an exciting match between Team Alaminos City and Mangaldan occurred in the first game. The neck and neck battle between the two teams ended with a win for the western city by three points, 89-86.

Other winners include San Carlos City with 89 points against Pozorrubio team’s 62; and Bayambang team with 81 points against its rival, Sta Barbara team, with 66.

Aside from Rosales team, the volleyball teams of  Bayambang, San Nicolas and Alaminos City also hauled their first wins against their rival contingents in the initial play-offs of the sports activity which was conceptualized by Gov. Amado “Pogi” I. Espino III who intends provide a venue for government officials and employees to meet and unite as one Pangasinan family.