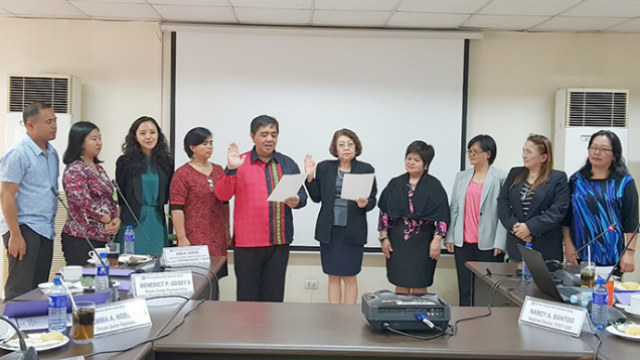 BONTOC, Mountain Province – Dr. Rexton F. Chakas was sworn into office by Commission on Higher Education (CHED) Commissioner Lilian de las Llagas  as the College President of the Mountain Province State Polytechnic College after the College Board of Trustees unanimously voted for him to serve another term as head of the State-run higher education institution during the Special Board Meeting at CHED Central, HEDC Building, UP Diliman, Quezon City on July 04.Chakas, the 5th College President, was appointed to the post on July 25, 2014 and by the virtue of Board Resolution No. 28, series 2018 of the Board of Trustees, President Chakas will hold his 2nd term as the College President from July 26, 2018 and will end on July 25, 2022.

“I am very honored to remain as the College President and given the opportunity to serve for another term and I hope that the trust and confidence and support of the stakeholders of the College  will remain steadfast  as we  continue to fulfill the mandates of the College in providing quality education and excellence to the youths” he committed.

Prior to the unanimous decision of the Board of Trustees, the Evaluation Committee was formed to assess the performance of the College President. The evaluation committee chaired by Dr. Emerlinda R. Roman started to work on April 23 and had their last meeting on June 4, 2018. Dr. Roman presented their report before the Board of Trustees unanimously endorsing the reappointment of the College President.

During his first term, the College has steered with significant achievements in the four fold functions of the College namely instruction, research and extension, resource generation and linkages. Under his management, thirteen (13) Certificates of Program Compliance were issued by the Commission on Higher Education to the College to date. Physical Facilities and Infrastructure Development projects were being implemented in the Bontoc Campus, Tadian and Paracelis Campus to include the acquisition for the expansion site of the Bontoc campus in Faliling.

Banner photo: VOWING ANEW. Dr. Rexton F. Chakas (5th from the left) reads his appointment witnessed by the Board of Trustees chaired by Commissioner Lilian De las Llagas (6th from the left) as the renewed College President of the Mountain Province State Polytechnic College at CHED Central, UP Diliman, Quezon City. MPSPC photo