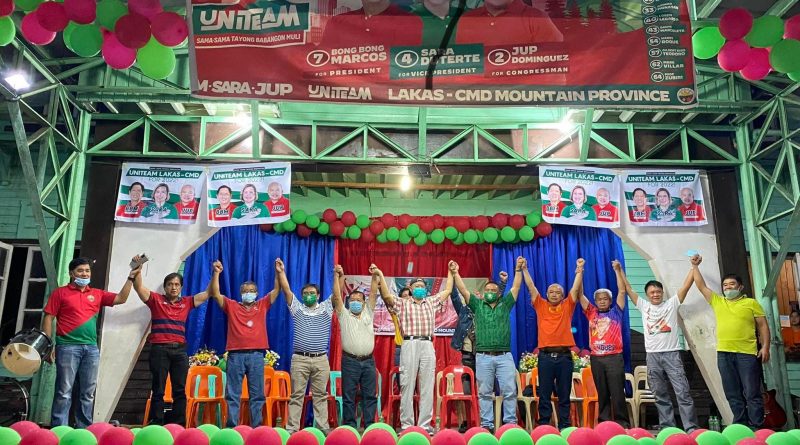 SABANGAN, Mountain Province – Members of the local Uniteam expressed their heartfelt and sincerest gratitude to the province’s electorate who supported them and believed in their long-standing advocacy for change and prevent the possible dynasty in the future.

Former and incumbent local officials and elders from the different municipalities claimed that the recent campaign was fruitful because they were able to gain the support of numerous allies from various sectors that believed and upheld the said advocacy to avoid the province from being stagnant in terms of development because numerous programs, projects and activities are concentrated on physical infrastructure.

While the Uniteam’s congressional candidate, former Mayor Engr. Jupiter Coto-ong Dominguez, did not make it this time, the leaders pointed out that they respect the decision of the people as voiced out in the results of the recently concluded elections but the advocacy still remains.

Further, the Uniteam will remain a formidable force to reckon with despite having difficulties in running the previous campaign but the support that was shown by the people will serve as an inspiration and motivation to move on and work for the betterment of Mountain Province even in their private capacities because rendering public service dies not mean that one must be an elected official but it is within the heart of an individual to do the needed service for the welfare of the greater majority of the populace.

Dominguez was able to extensively present himself to the people as an alternative choice for them to supposedly elect as the province’s District Representative to the House of Representatives but it seems that there were some considerations and events that had influenced the final decision of the voters when they casted their votes on election day where the same was already beyond the team’s control.

Moreover, Dominguez was the only congressional candidate in the Cordillera who was aligned with the Uniteam of President-inwaiting Ferdinand Marcos, Jr. and Vice President-in-waiting Inday Sarah Duterte-Carpio having been the official candidate for congressman of the LAKAS-CMD where the latter belongs.

Subsequently, the LAKS-CMD forged an alliance with the Partido Federal ng Pilipinas (PFP) where Marcos is the standard-bearer that eventually formalized the said alliance as many other political parties aligned with the said merger of parties.

For his part, Dominguez expressed his gratitude to the people of Mountain province for having listened to his platform of government that involves the striking a balance among physical, human and digital infrastructures where the same could be achieved once there will be focus on how to undertake the said interventions with the support of concerned government agencies.

He pointed out that he remains committed to render genuine public service to the people who continue to believe in his advocacy and to those who will be convinced in what he is fighting for so that there will be real change in Mountain province that will allow the province to be elevated to a higher level of development that will be inclusive and for the benefit of the greater majority of the populace instead of the so-called chosen few.