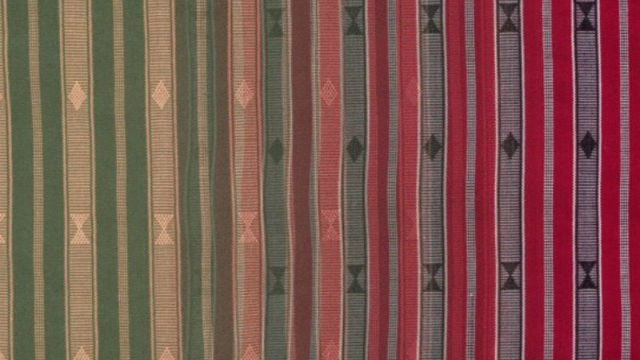 BONTOC, Mountain Province– The provincial board urged all souvenir shops, department and garment stores, online selling sites among others to stop the buy and sell of machine printed cheap replica of Cordillera indigenous woven materials and parcels in the province and elsewhere.

Under Resolution No. 2021-030, the board stated that as members of the Cordillera indigenous peoples aim to protect the local weaving industry in the region with the aforesaid intervention preventing buy and sell of the cheap replica of indigenous woven materials and apparels.

The board pointed out that the machine printed cheap replica of Cordillera woven products threatens the sustainability of the original indigenous peoples tradition, economy and business that had long been passed on by their ancestors to the succeeding generations.

According to the body, the high quality Cordillera indigenous woven products and apparels which have its own origin and traditions and which represents tribe identity have been preserved and sustained from generation to generation by the different Cordillera tribes.

Earlier, Rep. Maximo Y. Dalog, Jr. informed the provincial board through a letter with the attached request for interference of Ms. Lomas-e complaining that a machine made cheap replica of the high quality Cordillera indigenous woven materials and apparels from Divisoria and China are displayed in the different department stores in Baguio City for sale at a cheaper price than the original that significantly affected the marketing of originally produced woven products.

As part of the ongoing initiatives to drumbeat the clamor for the stoppage of the rampant sale of the questioned woven products, the Cordillera office of the National Commission on Indigenous Peoples (NCIP-CAR) issued show cause orders to a number of establishments in Baguio City for continuously selling the machine printed cheap replica of the woven products that had been said to cause the eventual death of the lucrative weaving industry.

Concerned weavers from the different provinces had been going to the different local governments around the region to appeal for support from responsible local officials to prohibit the sale of the machine printed and cheap replica of the woven products to prevent the local weaving industry from being sidelined and for the local weavers to be able to sustain the growth of their sources of livelihood for several decades now and for the same industry to live on.

The provincial board furnished copes of the aforesaid resolution to their counterparts in Abra, Apayao, Benguet, Kalinga and Ifugao for the passage of a similar resolution supporting the clamor of Cordillera weavers to send the clear message to authorities for proper action against those who continue to sell the machine printed cheap replica of the woven products.

The region has been known to be the major source of quality woven products that are being sold in markets located in the different parts of the world. By HENT

This post has already been read 2059 times!LA TRINIDAD, Benguet – Benguet caretaker congressman and Anti-Crime and Terrorism through Community