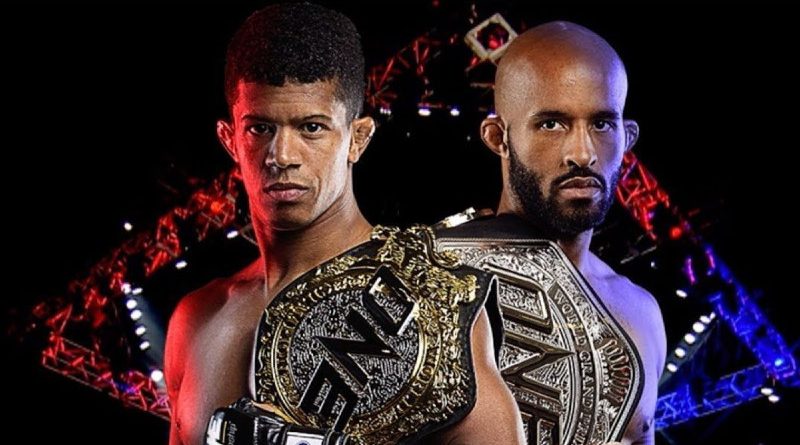 Adriano “Mikinho” Moraes carried the ONE Championship banner and proved their fighters can compete against the best of the world with an incredible second-round knockout of the perceived GOAT, Demetrious “Mighty Mouse” Johnson, during “ONE on TNT I” on April 7, 2021 held at Singapore.

The division’s reigning king may have entered this ONE Flyweight World Championship fight just about a 5-1 underdog but after handing Johnson the first stoppage loss of his legendary career, there is no disputing who is currently the best flyweight in the world.

The Brazilian rocked the former UFC lightweight king with an uppercut to send him to the canvass. As “DJ” scrambles to grapple the onslaughting Mikinho from the ground, Moraes followed his attack with a vicious grounded knee, an illegal move in the UFC but allowed in ONE, that found his chin and send him to kingdom come midway through the second round.

Both men played their roles as expected in the early running of round one.

The defending World Champion stayed light on his feet, kept his distance, and slammed in some hard low kicks, while the challenger tried to close the distance behind his punches. Johnson did briefly force Moraes to the Circle Wall to score with knees, but the Brazilian managed to turn and back away.

The biggest moment of the frame came when “Mikinho” caught his rival’s kick and pulled guard to attack for a leg lock. From there, he took top position, where he controlled the American and chopped with short right hands. However, “Mighty Mouse” stayed busy and tried to strike with punches and elbows from his back.

There was extra intent from both corners as they stepped out for round two.

Moraes probed with kicks, while Johnson tried to find his range with straight punches. “Mighty Mouse,” however, struggled to traverse the distance on his rangier foe. The Washington native then tested the waters with a double-leg takedown attempt, but “Mikinho” was well-prepared and fended it off early.

The Brazilian continued to circle and “Mighty Mouse” gave chase, but that ultimately led to his downfall. The American Top Team representative threw a right knee, which Johnson tried to catch but couldn’t keep hold of. However, he saw his chance to close the distance and came forward with punches.

As he did, the Brazilian clocked him with a well-timed right uppercut that dropped the flyweight legend to the canvas. Johnson tried to battle up with an underhook, but Moraes scored with a clean left knee to the jaw and then a volley of rapid punches that separated the American from his senses.

The referee was quick to wave off the action at the 2:24 mark of the second frame, giving Moraes a career-defining KO.

The win improved Moraes’ career fight record to 19-3 and gave him his first successful defense of the title he won over Team Lakay’s Geje Eustaquio in 2019.

On the other hand, Johnson drops to 30-4. He is now 3-1 in ONE, after a clean sweep of the   ONE Championship Flyweight Grand-Prix.

Meanwhile, Rodtang “The Iron Man” Jitmuangnon earned a hard-fought unanimous decision victory against Danial “Mini – T” Williams and Eddie “The Underground King” Alvarez delivered an illegal blow that the referee deemed landed at the back of the head of Iuri Lapicus to loss via disqualification at 1:03 of round one.

3. Iuri Lapicus defeats Eddie “The Underground King” Alvarez via disqualification at 1:03 of round one of  Lightweight bout

6. Oumar “Reug Reug” Kane defeats Patrick “Big Swiss” Schmid via TKO at 1:48 of round one of Heavyweight bout

By Armando M. Bolislis, with reports from ONE Championship’s Jay Furness