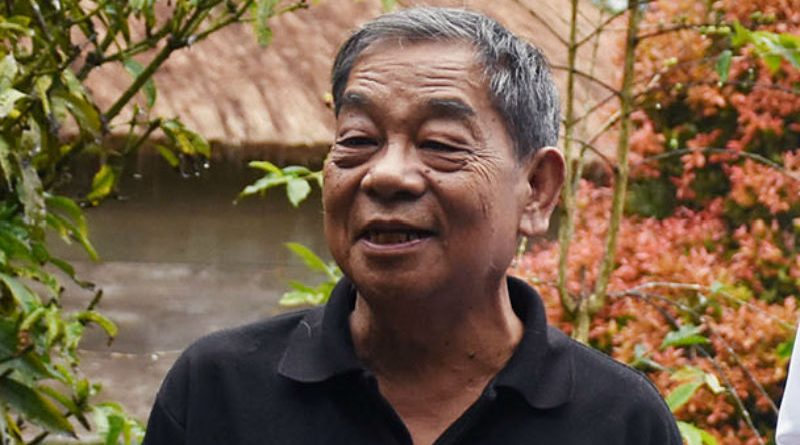 (This piece could really land in any section of this site but the sports section would like to give tribute to his being a sports journalist early in his career.)

Veteran journalist Ramon ‘Mondax’ Santa Dacawi will be remembered as the ‘Good Samaritan’ by the numerous individuals with lingering diseases whom he helped using the power of his pen to generate help for the needy.

He served the city government of Baguio for 42 years, 36 of which he held the Public Information Officer designation until he retired in 2016. After his retirement, he continued his advocacy programs in his private capacity as a journalist by writing the stories of indigent patients in the hope that good Samaritans will be reached and help will trickle down to the most in need.

Mondax finished his primary education at the Rizal Elementary School where he graduated as the class valedictorian. He took up his secondary education at the University of Baguio Science High where he led the campus paper as the Editor-In-Chief and was later on given a college scholarship in the same university with the a degree in AB History and English. He finished his college degree in 1973 with a Journalism Award.

Wittiness from Ifugao to Baguio

Mondax traces his roots from Hungduan, Ifugao although he was born and raised in Baguio. His father being the youngest had no inheritance to support his family and so the migration to Baguio walking five days through the old Mountain Trail from Hungduan to find a work. Luckily, his father was taken in as a gardener at Wright Park.

Among the Ifugao’s, the eldest is bestowed the inheritance and the youngest would have to work for a living, Mondax once narrated.

An alien to the culture and tradition of the Ifugao people, Mondax retraced his roots by learning to understand and speak local dialect of his tribe through his relatives in Sablan, Benguet. He spent his summer times in Sablan where woodcarvers from Hapao, Hungduan have settled and even carved wood ashtrays. His products were sold in Baguio where he earned his school allowances.

He embraced his roots as a true-blood Ifugao but at the same time, Mondax was a proud Baguio-boy.

‘Mondax’ has been his byline in his articles since high school and college. It actually means “Mon dakes” he told his friends. The love for words, written or spoken has been his bread and butter aside from working as a laborer and as a newsboy while growing up.

He was able to finish his education as a scholar, being the editor of their campus paper in high school. After college graduation, he worked as a correspondent for the Gold Ore, Philippine News Agency, and People’s Journal. He also worked as a columnist for The Manila Times; News and Sport editor for the Baguio Midland Courier; and editor of the UB Forum. Obviously, his records showed that he has been a journalist as young as high school up to his death.

He became the president of the Baguio Correspondents and Broadcasters Club for four terms advocating for press freedom and helped Baguio blossom through media promotions. He also became president to the Association of Government Information Officers in the Cordillera.

Mondax devoted his life in community development and civic works. Particularly, he was the brains behind the city of Baguio’s Eco-walk Children’s Environmental program focused on environmental protection and the Children’s Urban Heritage Walk Program centered on cultural and historical preservation.

He led the campaign for free dialysis treatment in the country which was recently approved by the House of Representatives on third and final reading as House Bill 9156 or the “Comprehensive Renal Replacement Therapy Act.”

During the rice crisis in 1989, he initiated with the late Manager Philip Wang of the National Food Authority the establishment of the first ‘Bigasang Bayan’. He helped established children’s tree plantations in Tuba, Benguet and in Gonogon, Bontoc, Mt. Province. He also worked out United Nations Development Programs-supported watershed enhancement project in Sagada, Mt. Province.

During the outbreak of the meningococcemia scare in the city in 2005, Mondax initiated the creation of a media management team to write stories that will refurbish the somewhat stained image of Baguio as the Summer Capital.

He will be remembered with his usual advise to young journalist during campus lectures which was “to become a good journalist, one must not stop reading,” while his parting words was always to “live Baguio’s character of ‘fairness’ in everything.”

Mondax is survived by his daughter Veronica, son Johann and wife Rebecca.

(Sports Ed note: While Ramon Dacawi was more known for his service to the Baguio City government as Public Information Officer and his philanthropic work for dialysis patients, he was also introduced to many budding sports journalists, way back then until lately, as a trainer/judge in local and regional schools press conferences, the sports editor of this paper included. Personally, I recall the time back in the late eighties when I had to scramble for copies of the Midland Courier to see samples of his sports work when I found out that he is going to be judging the contest pieces in the event I participated in, just to see how he does them. Luckily, our home then had many of copies of those back issues and the research, among others, enabled me to comply on his requirements during those contests, the winning of which sparked further my interest in writing sports stories. AMB)