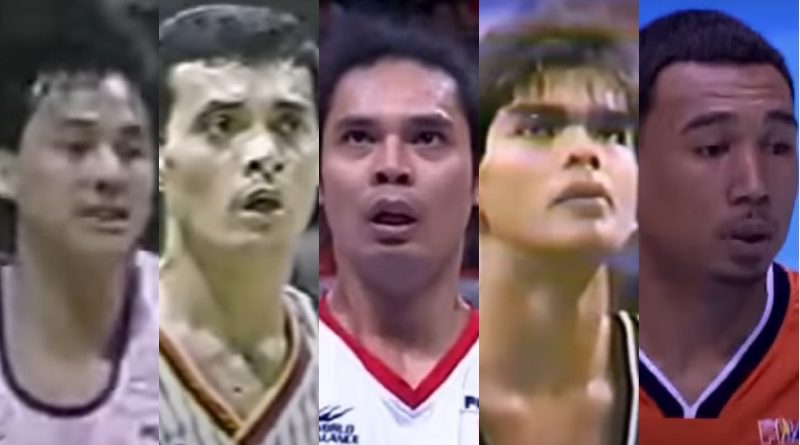 This fantasy team consists of a five that will provide fans the ultimate aerial artistic display than any other combination in PBA history.

As usual, rules are all PBA players in their primes at my disposal and realistic assumptions are to be in place. Putting in just five dunkers in the team wouldn’t work. We have to put in guys who can play their positions and make the team competitive.

“The Aerial Votager” would led my all-acrobatic team. The one-time MVP, one-time Most Improved Player and two-time Slam Dunk champion owns of various aerial moves, my favorite of which are the ones he glides in a sitting position in his drive to the basket.

He will be the centerpiece for the team’s offense.

He also has a decent shot from downtown, converting 352 treys during his career.

I was thinking of putting Samboy Lim here but “Mr. Excitement” would get the nod because of his better athleticism.

While both Alvarez and Lim are high flyers, Alvarez got the edge in high-leaping, slam dunking acts in my eyes.

Alvarez once set the PBA all-time high score by torching Shell with 71 points on April, 1990. That record was second to none until Allan Caidic broke it over a year later.

Alvarez scored 6,626 points during his career, although  averaging just 11.6 a game.

His lack of a three point shot is probably his Achilles Heal, especially that he plays this position.

Ironically, he has never won any PBA slam dunk contest but that should not diminish his wowing the fans with aerial shows that are mostly filled with power dunks, some taken vertically without spurts.

This team isn’t much of an outside threat so I’d like to add more meat on the defensive aspect of it.

Aguilar would anchor this for team with his agility and propensity to block shots of the help, which will bode well for this team.

He’s proved his mettle for the aerial acrobatics when he filled the 2019 PBA All-Star game with dunks to the delight of the viewing fans.

On the basketball game side, Aguilar had been on an individual accomplishment tear lately, winning the 2019 Governor’s Cup final MVP award and earning a spot in the PBA All-Defensive team in three of the past 4 years.

It doesn’t hurt that he has a lethal three point shot during the clutch as he bailed Ginebra with a crucial basket from downtown in a few occasions already. He sinks downtown shots at very respectable levels on two separate occasions, 40% during the 2014-15 season and 37.5% during the 2019 season.

“The Tower of Power” would pair well with Aguilar given he could play the post as well as start his attack from the perimeter.

He is one of the athletic centers in the league during his prime. His usual aerial acrobatics involve a burst of speed followed by a power jam.

One achievement probably forgotten by many because it was overshadowed by his being the only Rookie-MVP awardee of the same season, Paras was a one-time PBA Slam Dunk champion, winning it in 1995. He also won MVP twice.

The 2016 PBA Rookie of the Year had been a constant participant of the PBA Slam Dunk contest, although he has still to win one.

Newsome averages over 15 points and 5 assists a game during his career, lately picking his numbers up, especially during the 2019 Governor’s Cup.

“The Bull” would be a perfect substitute for either Aguilar or Paras if the team want a change of pace. Asaytono is more effective in isolation cases and can make the occasional three point shot.

It was a difficult decision to relegate “The Skywalker” to the bench. Lim was an equally exciting aerial acrobat although his inability to tame the inherent dangers of high-flyers seems to always put him out of commission, suffering too many injuries during a time when the game was played physical.

I think he would be on the floor more often had he played today with the rules geared more to protect the players.

Who could forget Norwood dunking over Luis Scola during the World Cup? I hate to leave him out of this team because of that.

No contest here. Bates isn’t christened the “Black Superman” if he couldn’t fly. He really does.

Bates was described as the “Julius Irving of the Philippines” because he has natural ability to hang in the air longer than any defender and powerfully slam the ball into the rim at the last instance.

Bates also has a reliable jumper that extends even to the three point line.

Bates averaged 46.2 points in 98 career games during his five-conference stint in the PBA. He played two with Crispa and another three with Ginebra, leading his team to the championship three times.

His offense will take this team to another level. For thoise who were not born or too young to see him play in the Philippines, his scoring abilities could be vouch by his 25 point average for the Portland Trailblazers during the 1980 NBA playoffs in a first-round loss to the Seattle Supersonics, still the highest for any non-starter’s production in a playoff series.

In one ironic twist, Bates lost a slam dunk contest to Alaksa’s Sean Chambers held during 1987 PBA/IBA World Challenge Cup mini tournament. Chambers was first introduced to the Philippine audience during this tournament, representing the IBA All Stars.