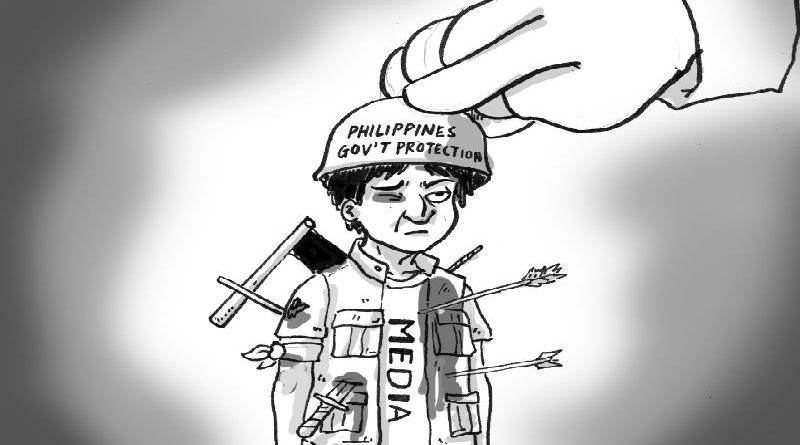 The Philippine Constitution guarantees the basic right of the people to freedom of expression, speech and of the press but with stipulated limitations to prevent the same from being abused. The Constitution also spells out the aforesaid limitations to ensure the preservation and protection of national security, territory and sovereignty. Indeed, the media is one of the sectors that has been given the constitutional mandate to serve as an avenue for people to express their views, insights, sentiments, observations and recommendations on how the government should run its affairs to achieve the overall goal of growth and development.

The media is vital as an avenue where individuals and groups can ventilate their issues and concerns, so with their communities, and it has done so for the past several decades Media as the Fourth Estate serves to bring the truth to its audience and thus wields political power in its free existence at it serves as a check the excesses of the State, in particular, the three branches of the government, and the private sector and civil society. Media in turn serves as a balance between the government, the private sector and the people and it also bridges the gap among the aforesaid sectors of society. It also serves as an avenue for discourse among the involved sectors for the betterment of the general public.

Historically,  media has been too Manila-centric depriving people in other parts of the country the voice and opportunity to raise concern over pressing issues that need immediate attention from concerned government agencies, the national and local governments. Giant media outfits in radio, television and newspapers have been dominating the airwaves and media spaces providing prominence to publicity-hungry politicians and national officials. Legitimate and burning issues in the countryside have been left in the inside pages of newspapers or in short news items of radio and television networks because of the prominence being given to sensationalized news being engineered by the  spin doctors of politicians and national officials.

Media practitioners had always been fighting for the protection of the rights of the abused and the marginalized but it seems media personalities cannot fight for their rights in terms of sufficient security, insurance, among other benefits. In many cases, journalists who are no longer active due to health issues often are left to fend for their needs. When they write 30, the members of their families have very limited benefits from the long years of serving in media. The members of the media are one of the least compensated in the country’s labor force despite the enormous effort exerted in the crafting of news items for broadcast or print aside and the risk involved in pursuing the trade. This neglect of the welfare of media practitioners continues due to the absence of adequate safeguards for them in pursuing their work.

Another issue confronting the media sector is the proliferation of television and radio blocktimers with their sponsors often confusing the public on what is truth and opinion. Radio and television blocktimers naturally would align themselves to politicians and multinational companies funding their existence. On the other hand, members of the mainstream media are those that are employed by legitimate media organizations that practice the Journalist’s Code of Ethics and the broadcaster’s ethics contrary to the blocktimers whose loyalty remains with their benefactors, thus, the big difference between the blocktimers and legitimate media practitioners. Records show that several members of the media who had been assassinated over the past several decades are blocktimers because of their efforts to preserve and protect the interest of their benefactors. While there are members of the legitimate media who had been killed, they could only be counted by the fingers and that they had been killed because of their advocacies.

We are elated to learn that the Presidential Communications and Operations Office (PCOO) under the leadership of Secretary Martin Andanar, a former legitimate media practitioner, has advance the Media Welfare Act that aims to guarantee the protection of the members of the media, particularly providing them sufficient compensation, security, among others to, uplift the practice of the media profession to a higher level.  We urge our lawmakers to support the passage of this measure in both chambers of Congress to ensure that media practitioners have improved benefits and working conditions.

On the other hand, media should uphold its responsibility to expose the abuses of both state and non-state actors and to check these do not go un-addressed. Imbued with a watchdog role, media must use its power to seek and promote the truth especially in this age of fake news and trolls which further confuse media consumers. Media as a truth-seeker is necessary for democracy to be functioning and vibrant. To effectively exercise this role, the welfare of media practitioners must be assured and promoted. We must therefore provide the media with the sufficient protection so that they will continue to be the guardians of the truth and prevent abuses being committed against the people.