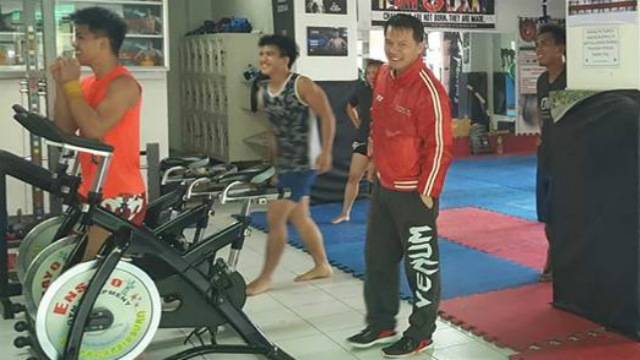 Can Mark Sangiao be the same great leader of his pack of Cordilleran warriors despite a huge change in the scene at Team Lakay or will he suddenly turn a father to his son?

With his 19-year-old son, Jhanlo Mark, impending to make his international debut at ONE: WINTER WARRIORS II on December 17 in Singapore, Sangiao joins Philadelphia 76ers head coach Doc Rivers and Meralco head coach Norman black as among the famous fathers who had to bear the responsibility of coaching their respective sons with a group of athletes and giving them playing time at the expense of others in the team where thousands of eyes are expected to feast on their performances.

While Sangiao’s field does not deal with the problem of sharing playing time in the hardcourt, his time with “the boys” and the manner he deals with them is definitely under scrutiny.

“This will be the first time that I’m going to coach my son,” he said in Team Lakay’s recent media availability.

The legendary Team Lakay coach had been, well, legendary in his coaching career. Whatever methods he is applying, his coaching style produced multiple champions in a couple of international promotions.

Stephen Loman still holds the longest title reign in BRAVE Combat Federation’s history while Eduard Folayang, Joshua Pacio, Honorio Banario, Kevin Belingon, and Geje Eustaquio once wore a ONE Championship diadem. Four of them, in fact, wore their belts simultaneously at one time.

That made Sangiao and his gym in demand amongst local fighters to the extent that they switch gyms for a shot at improving their MMA careers.

Coach Mark couldn’t help but feel emotional as he faces the new challenge of juggling his role of being a caring father and a stern coach to his son and a coach and leader of his gym.

He may not like it but the elder Sangiao might be under duress than his son given his accomplishments with these fighters precedes him.

Surely, there will be pressure to deliver for both his fighters and his son at equal degrees at the very least. It doesn’t help him either that Jhanlo is showing signs of possessing the needed talent to survive in the big leagues and lots of promise to become the next face of the gym.

Sangiao is aware of and acknowledges this. Although he has fulfilled the role of a fatherly figure to his fighters, especially to the younger ones led by Pacio, the reigning ONE Strawweight World Champion; Loman; flyweight contender Danny “The King” Kingad; and rising stars Lito “Thunder Kid” Adiwang, and Jenelyn Olsim, his situation with Jhanlo is really a unique one of its own.

“Although I consider our athletes as like our own children, it’s really different when it’s your own blood,” he said.

He doesn’t need to look far for an example as the Manny Pacquiao-Freddie Roach tandem bears it all. It is widely known that when Pacquiao had an upcoming fight, Roach will give his undivided attention to him, leaving his other trainers and coaches to tend to other fighters of the wild Card Gym who is preparing for their own battles.

It is likewise probably true that failure by his son to perform at par with the lofty standards of Team Lakay would probably far painful for Sangiao than when it happens to any of his fighters.

So it wouldn’t be surprising if he offers more of his time and efforts to his son at times like this.

The elder Sangiao, however, is wise enough to spot the big differences in situations heading into Jhanlo Mark’s promotional debut, where he will face Indonesian striker Paul “The Great King” Lumihi in a bantamweight showdown.

And his decision to play fair by coaching his son hard and not to treat him with kid gloves while expecting nothing less from his own flesh than performing at the level his fighters had earlier set will likely pay big dividends for every one and all in the gym.

“If it’s just up to me, I will treat him the same as our other athletes. But we don’t know what will happen and like I said, that will be the first time that I will experience that. So I think we could only wait for fight night before we can see how different I could really be when I’m just barking orders for him as a coach on the side,” he stated.

By setting the example that he doesn’t play favorites to any of his fighters aside from the deviation that Jhanlo is his own son, he is bent on holding each and every fighter accountable if they hadn’t meet the standards the pioneers had set.

That should set everything fine. It might even inspire others fighters upon seeing Coach Mark is doing the exact same thing to his own blood as he is with them.

On the other side of the story, Sangiao never expected his son  to follow his footsteps and take up the sport of mixed martial arts.

But such might really be what fate intended for someone like Jhanlo Mark, who wasn’t just born but also raised with Igorot champions but also exposed at a young age to top-caliber talents inside the Team Lakay Central Gym in Benguet.

What’s working for the Sangiaos, though, is Jhanlo Mark adapting quickly to the situation, all the more with the pressures of having his first match in ONE Championship.

“He has to understand how to handle pressure despite this being his first time fighting here. But as far as I can see, he’s really ready to fight,” said coach Mark of his son.

And it’s no wonder why the decorated coach is so confident in the abilities of his son that he wasted little time handing down his own moniker of “The Machine” to Jhanlo Mark as he begins to make a name for himself in ONE Championship.

“Now that he’s old enough, he could already have the name of ‘The Machine’,” coach Mark proudly said.

“That name was given to me when I was still an athlete because when I was starting, I didn’t stop until there was a clear winner. So to me, the fans can only expect that the fruit is better than the tree.”