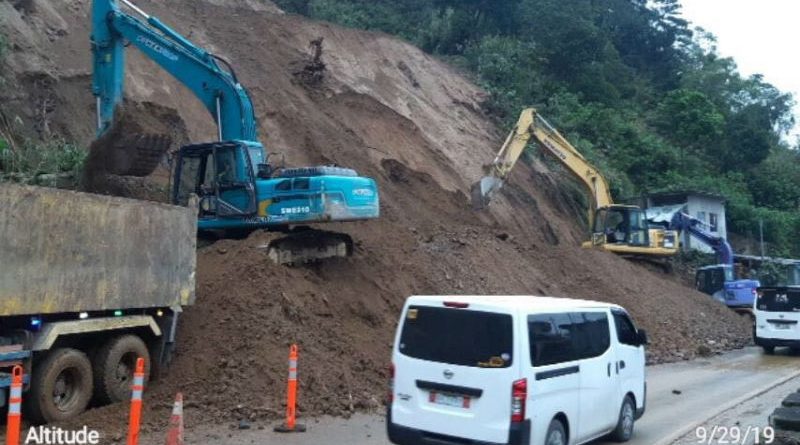 TUBA, Benguet  – The Department of Public Works and Highways – First Benguet District Engineering Office (DPWH-FBDEO) and public works contractor were able to open the Palispis-Aspiras Highway, popularly known as the Marcos highway, to vehicular traffic at around 4 pm Thursday after clearing a 20-meter portion of the main highway that was covered with a huge landslide at Poblacion.

At around 6:15 pm of September 25, 2019, a landslide probably triggered by the previous onslaught of monsoon rains transpired in Sitio Begis, Badioan, Poblacion here that covered some 20 meters of the main highway with a height of some 40 meters.

DPWH-FBDEO District Engineer Ireneo S. Gallato immediately mobilized the agency’s available units of equipment and coordinated with private contractors, particularly MA Camilo Freight Services, to provide the needed augmentation to ensure the speedy clearing of the road from the huge debris that caused the closure of the road for more than 2 hours.

The landslide heavily damaged an electric pole that unfortunately landed in a parked passenger jeepney that inflicted injuries to two commuters, a 17-year old student and a 34-year old adult.

Aside from ensuring the appropriate deployment of the maintenance crew and the available units of equipment, DPWH-FBDEO personnel also installed proper road signages in various parts of the road to inform and guide motorists on what happened in the area.

Personnel of the Tuba municipal government led by Mayor Clarita Sal-ongan and the Tuba Municipal Police Station headed by Police Maj. James Acod also helped out in managing the flow of traffic until the road was cleared from the debris and rocks that resulted to its being opened to vehicular traffic in less than 24 hours.

Gallato explained that despite the presence of the agency’s maintenance crew and units of heavy equipment augmented by the crew and equipment of the contractor who happens to be a resident of the area, the clearing operations did not immediately commence because of the continuous flow of debris and rocks from the mountain slope, thus, they waited for quite sometime before starting the said operations.

“We have to make sure that the road will be passable at the soonest possible time that is why we had to work extra hard to ensure that one of the road was passable so that there will be no undue delay in the travel of our motorists wanting to go in and out of Baguio city and the transport of goods to the different places in the Cordillera,” Gallato stated.

He expressed his gratitude to the municipal government of Tuba, the Tuba Municipal Police Station, the DPWH-FBDEO maintenance personnel, the Highway Patrol Group, MA Camilo Freight Services, among others who immediately extended their assistance in managing the traffic and ensuring the clearing of the debris and rocks from the road carriage that caused it to be opened to motor vehicles in less than 24 hours.

Marcos highway is one of the major roads linking Baguio city to the lowlands after the closure of the scenic and historic Kennon Road which had been described as the shortest route to and from Baguio city.