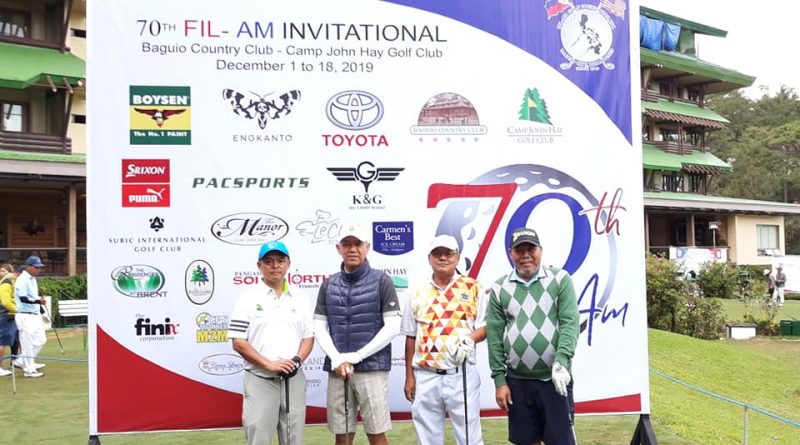 BAGUIO CITY December 05 – Chino Raymundo scored well at the short and tricky Baguio Country Club fairway to walk home with a two over 63 which is good for 34 to lead Luisita Golf and Country Club to 122 and take the opening lead in the 70th Fil-Am Invitational Golf Tournament today (Dec. 5) at the Baguio Country Club.

A last day collapse last year denied Luisita a back to back title, but the Tarlac based squad is dead set to rectify things this time to win the coveted Seniors Championship crown.

Raymundo had solid games from his teammate with former pro player Eddie Bagtas scoring a 31, While Rodel Mangalubnan and Danilo Cruz chipped in 29 and 28, respectively as Luisita opened with a five shot lead on Manila Southwoods.

Southwoods got a 33 from Raul Minoza, while Tommy Manotoc churned in a solid 30 and a pair of 27s from Bong Sison and Theody Pascual to keep the Carmona, Cavite based squad at a striking distance on Luisita.

Southwoods enjoy a five point lead on third ranked Camp John Hay which had a 31 from Monet Garcia. John Marasigan made 29 points, while Fred Puckett and Goody Ignacio counted with a 27 and 25 points, respectively.

The former three time champion is 10 off the leading Luisita but six points ahead of defending champion Megafiber which managed a 106, 16 off the leader.

At Camp John Hay, Luisita benefited from a two point deduction on Southwoods as the two squad opened with a similar 115 points.

Demy Saclot paced the Luisita Am squad with 31 points and a solid 29, 28 and 27 from Edmund Yee, Chito Laureta and Raffy Garcia, in that order.

Southwoods was led by Thirdy Escano, who shot one of the three over in that division fort 33 points, Daniel Samaniego added 29, while Alexander Ignacio chipped in 26. But Southwoods could have taken the lead if Raulito Magpantay’s score of 27 was taken but he was penalized for two points for an infraction.

Dugong Bughaw and Leeward Fil-Am are tied at third spot with an identical 113 points.

“We are at a disadvantage here and we know that Luisita is a strong team,” said Escano of Manila Southwoods. “But then we will be giving them a good fight. Laban lang kami (We have to fight on),” added the former national team member.

Defending individual champion and former Baguio mayor Mauricio Domogan chipped in 28, while Albert Tualla tallied 20 and Jun Tolete and Carlos Nano had a pair of 16s, one of which did not count.

Senior Golfers of Veterans, Inc. had a 26 from Jun Baguco for a 69, while Eaglemasters is at third spot with 57.

Photo: THE FOUR OF US. Friendly competition from the four teams in the Seniors Championship flight, all of them held the title at least once. The four who were in the same flight from left: Camp John Hay’s John Marasigan, , Manila Southwoods’ Theody Pascual, defending champion’s Bing Bunye and pacesetting Luisita’s Eddie Bagtas. Fil-Am photo