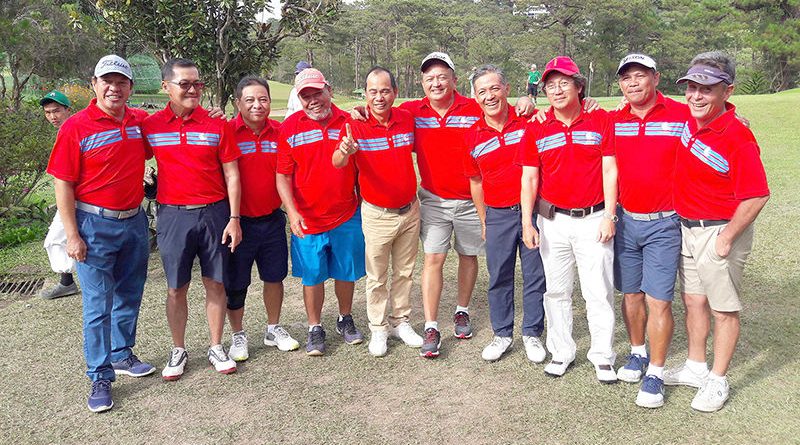 “Mission accomplished, we came back to the Fil-Am and even swept the top flights,” cried Luisita team captain Jeric Hechanova as his Fil Championship team romped off with the crown at the Camp John Hay (CJH) golf course even as the Am squad avoided a melt down and stayed CJH at the Baguio Country Club (BCC) layout.

It was double victory for a rejuvenated LGCC under a new management which won the PAL Interclub title earlier this year.

Eddie Bagtas had a tournament best four under for 40 points and Rodel Mangalubnan churned in a two under for 38 points to power Luisita to a closing round of 141 and 507 total for a 30 point win in the Fil Championship over Manila Southwoods.

“We expected that,” Hechanova said of his players who he said earlier will all deliver at the longer CJH course. Jingy Tuazon collected 34 points and Chito Laureto submitted a 29, who, both like Bagtas and Mangalubnan, are “meant for CJH than BCC because they are long hitters.”

After a so-so back nine where he made two birdies against a bogey and a pick up at the ninth, Bagtas collected five birdies including a back to back at the 8th and the difficult ninth.

Megafiber had 107 points and 437 total to stay at third place.

Hechanova and the Am squad nearly faltered when they moved to BCC on day three where they lost four points to CJH. But the players survived as “it brought out the experience of the players especially Benjie Sumulong and Raffy Garcia,” said Hechanova.

The Am squad even padded the margin to 10, thanks to the 30 points of Sumulong, the pair of 28s from Garcia and Alan Alegre and 25 of Dennis Canoy for 111 points and 452 aggregate. Hechanova’s 24 did not count.

Luisita last played in 1994, the last of the all club competitions won by powerhouse Canlubang then led by Tony Lascuna and Richard Sinfuego.

Camp John Hay made 106 and 442 to settle for second place, while Dugong Bughaw had a closing round of 90 for 400 and salvage third place nipping Team Baguio by two after an 88.

Nueva Ecija Seniors closed with a 95 for 373 and a six shot win over BCC in Seniors Fil A. Forest Hills made 84 and 328 total which is good for third.

Wednesday Club of Mimosa fired a closing round of 99 and a four day total of 382 and a four shot victory over Team Na Koa which also made a 99. San Miguel Corporation finished third after a 77 and 367.

Guam Kool Swingers bounced back on the last day and outshot overnight leader Teerifics 83-76 for a four shot victory in Seniors Fil B.

Jeff Lowery closed out with 29, Noly Carino and Dan Ganacias had a pair of 21 and Willie Jamero made 12 points to count for the Guamanians which assembled a four day total of 322 against Teerifics which had 318. Four shots down is Golf F – Veterans which is good for third place.

Paeng Ding saved the best for last as he scored 23 points to lead Baguio Country Club to 71 and 305 total for a 19 point victory in Seniors Am B. The co-host team got 17 from Reggie Gamboa, 16 from Mon Aldana and 15 from Alex Tan and led through out the tournament presented by San Miguel.

Team City of Vallejo slowed down on the last day when it shot 77 points for a four day production of 322 but still a comfortable 26 point victory in Seniors Fil C. Bob Apalit closed out with 23 points, while three others – Carlos Ventura, Virgilio Litag and David Abellera – came in with 18 points to count for the team.

Macquarie Links Australia shot 75 points for 321 and a 26 point victory in Seniors Am C. Golf F Veterans finished second with 295 after a a 60 and a two point edge on third placed Apo Golfers Team Alpha.

IGC – Travellers closed out with 73 for 291 and a nine point victory in Fil H. Leopard Enterprises – LMG made 68 for 282 and second place, while Baguio Blue Blood had 72 for 273 and third place.

Yokusoka Rising Sun closed with a flight best of 67 for 262 and a three shot victory in Regular Fil H over Apo Golfers – Team Friendship (62=259).

Third round leader BZA Homestyle Crafts closed with a 53 for a 256 total and third place after 17 points from Francis Navarrete, 15 from Teddy Cheong, 11 from Chito de Leon and 10 from Derek Bautista. Brandon Watanabe. PML